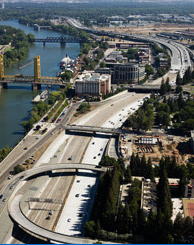 February 2, 2014 (Sacramento)—The California Department of Transportation (Caltrans) is “significantly out of step with best practices in the transportation field and with the state of California’s policy expectations,” concludes an assessment review conducted by the State Smart Transportation Initiative (SSTI).

A key criticism was the agency’s focus on a “move cars faster” culture and a draft five-year strategic plan at Caltrans that completely ignores sustainability and state legislative goals to reduce greenhouse gas emissions.

Duncan McFetridge, co-chair of the Cleveland National Forest Foundation that recently sued the San Diego Association of Governments (SANDAG) for similarly focusing on building more freeways instead of mass transit to reduce miles driven, cheered the report on Caltrans.

The report “vindicates everything we’ve done, said and written for the past eight years," he wrote.

According to the report, “A built environment that reduces vehicle miles driven (VMT) is precisely the goal of the State’s landmark climate policy…and it is precisely the opposite of what Caltrans was organized to do—foster higher auto mobility without regard to land use.”  It further notes that “even though transportation is the source of 40% of greenhouse gas emissions, the (Caltrans) strategic plan was written as though the law did not exist.”

The report found that Caltrans has “come to resemble a large engineering firm.”

McFetridge added that   SANDAG has functioned like a “business consortium that hires them with public funds.”

Orgaized to build a network of highways linking cities, Caltrans soon found the highway system largely built-out and focused more on operation and maintenance, while still orienting toward projects for new capacity and reconstruction.  Policies that gave more power to local governments to dictate shaping of transportation systems including state highway have also contributed to the problem, along with the state sub-allocating funding to the local level and cutting funds at the state level.

Caltrans has also failed to keep pace with changes such as Californians driving less than in the past, a fact that should allow less to be spent on highway capacity.  “Sustainability initiatives frequently have worked around, not through, Caltrans—even when transportation is the topic,” the report found.

The report indicated problems should not be blamed on current management at Caltrans since problems are longstanding, and the authors see “rational hope for its reform.”  The report calls for modernization and a culture change at the department.

It calls for a new mission, vision and goals better aligned with current conditions and a portfolio of skills and practices to meet modern demands.  Although Caltrans produced an important gide to foster low-travel land used called Smart Mobility 2010, the report observes, “the department has almost completely ignored the report and failed to implement its most important recommendations.”

Moreover, the department lacks accountability to hold staff accountable and to foster innovation in what the report describes is “a culture of risk aversion and even fear.”

Interestingly, while Caltrans has come under some fire recently from fiscal conservatives including Senate Joel Anderson (R-Alpine) for its expanded budget, the report also found that salaries are too low for some employee groups including planners and managers, leading to a “brain drain” that prevents Caltrans from rewarding good work with a meaningful promotion.

Imagine, a State agency doing what it is suppose to be doing and at the same time looking out for its clients, the 98% of us who do NOT take public transit. Our left wing, whacko, free to be you and me, legislators could learn a lesion here.