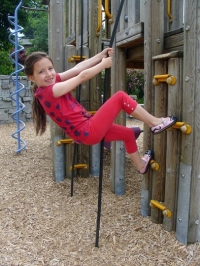 Researchers looked at federal statistics from 2008 to 2013 and ranked states on topics including health, education and economics in terms of how they affect children.

Jessica Mindnich from the Annie E. Casey Foundation's California affiliate, Children Now, says the results are unacceptable in such a wealthy state.

"We're the eighth-largest economy in the world and yet, we have one in four kids living in poverty," she says. "In fact, we're ranked 49th in economic well-being."

One bright spot for California kids in the report is the Golden State is ranked 14th in the nation for children's health, up from 26th the year before.

Mindnich says the jump in healthcare is due, in part, to California's aggressive implementation of the Affordable Care Act. The state has also opted to allow parents of undocumented children to enroll their kids in Medi-Cal as of next year.

"As a result of policy decisions over the last few years, having all kids with health insurance is actually a possibility in this state for the first time, and that's really exciting," she says.