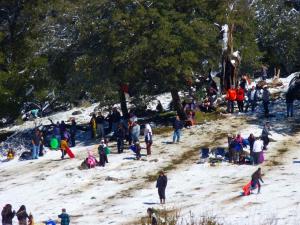 Even tougher times could be in store for the industry unless climate change is slowed, stopped and reversed, according to “Climate Impacts on the Winter Tourism Economy in the United State.” The new POW-NRDC report by University of New Hampshire researchers Elizabeth Burakowski and Matthew Magnusson, concludes that a failure to address the challenge of climate change will mean even tougher times are ahead for winter tourism.

“Surmised from all this data is a portrait of the American winter landscape with more than three-quarters (38) of states benefitting economically from these winter sports and 211,900 jobs either directly or indirectly supported by the industry,” the report says. “… Without intervention, winter temperatures are projected to warm an additional 4 to 10 degrees Fahrenheit by the end of the century, with subsequent decreases in snow cover area, snowfall, and shorter snow season. Snow depths could decline in the west by 25 to 100 percent. The length of the snow season in the northeast will be cut in half.”

Available online at http://www.nrdc.org/globalwarming/climate-impacts-winter-tourism.asp, the POW-NRDC report looks at the current snow conditions and projected impact of climate change on skiing, snowboarding, and the snowmobile industry. Shrinking numbers of winter sports tourists also hurts the bottom line of restaurants, lodging, gas stations, grocery stores, and bars, according to the report.

The impact of less snow and fewer people on the slopes, is already apparent across the U.S. December 2011 through February 2012 was the fourth warmest winter on record since 1896 and the third lowest snow cover extent since 1966, when satellites began tracking snow cover.  According to one industry survey, 50 percent of responding ski areas in 2011 opened late and 48 percent closed early, with every region experiencing a decrease in overall days of operation. The snowmobiling industry -- one entirely reliant upon natural snow -- has had relatively flat registrations since 2000.

“The winter sports industry’s dependency on consistent snow is serious business,” said Chris Steinkamp, executive director, Protect Our Winters. “Without a stable climate, our industry, our jobs, the economies of mountain communities everywhere and the valued lifestyle of winter will be gone. Climate change is the greatest environmental issue of our time and it’s got the winter sports community directly in its sights. It’s our obligation as athletes and businesspeople, parents and citizens, to act.”

“For those whose livelihood depends upon a predictable winter season, such unpredictability and lack of snow can translate into a precipitous fall in revenue, an early economic indicator of what climate change looks like,” said Antonia Herzog, assistant director, Climate and Clean Air Program, Natural Resources Defense Council. “In order to protect winter -- and the hundreds of thousands whose livelihoods depend upon a snow-filled season -- we must act now to support policies that protect our climate, and in turn, our slopes.”

The largest changes in the estimated number of skier visits between high and low snowfall years between November 1999 – April 2010 (over one million visits) occurred in: Colorado (-7.7 percent), Washington  (-28 percent), Wisconsin (-36 percent), California (-4.7 percent), Utah (-14 percent), and Oregon (-31 percent).  The resulting difference in economic value added to the state economy ranged from -$117 million to -$38 million.

In the Eastern region of the U.S. the states with the largest estimated changes in skier visits between low and high snowfall years were: Vermont (-9.5 percent), Pennsylvania (-12 percent), New Hampshire (-17 percent), and New York (-10 percent).  The resulting difference in economic value added to the state economy ranged from -$51 million to -$40 million.

More than 23 million people participated in winter sporting activities in 2009/2010.  Snow-related economic activity resulted in $1.4 billion in state and local taxes and $1.7 billion in federal taxes.

“This data reaffirms the fact that ski resort CEOs and trade groups leaders have a fiscal responsibility to both understand climate change and respond at scale,” said Auden Schendler, vice president of sustainability, Aspen Ski Company. “That should be the industry’s highest priority.”

The Natural Resources Defense Council (NRDC) is an international nonprofit environmental organization with more than 1.3 million members and online activists. Since 1970, our lawyers, scientists, and other environmental specialists have worked to protect the world's natural resources, public health, and the environment. NRDC has offices in New York City, Washington, D.C., Los Angeles, San Francisco, Chicago, Livingston, Montana, and Beijing. Visit us at http://www.nrdc.org and follow us on Twitter @NRDC.

Protect Our Winters (POW) is the environmental center point of the winter sports community, united together towards a common goal of reducing climate change's effects on our sport and mountain economies.  Founded in 2007, POW re-invests contributions in educational initiatives, activism and supporting community-based initiatives.  For more information, visit www.protectourwinters.org.  Stay in touch on Facebook at: www.facebook.com/protectourwinters.