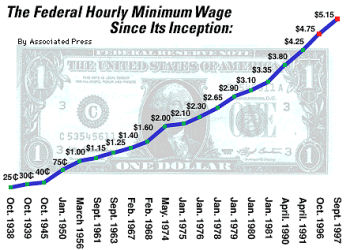 March 18, 2013 (Washington)--Two San Diego Congressional members, Democrats Susan Davis and Juan Vargas, joined 131 colleagues in introducing legislation to give minimum-wage workers a raise.  Both are cosponsors the Fair Minimum Wage Act (H.R. 1010) to boost the minimum wage to $10.10 over three years, increase the minimum wage for workers who rely on tips, and tie future annual increases to the rate of inflation.

“Earning minimum wage salary should not mean living in poverty or struggling to pay the bills,” Davis said.  “A minimum wage increase would enhance the economic security of our families by putting more money in the pockets of those who need it most.  Let’s honor and respect our hard work minimum-wage earners by giving them a much-deserved raise.”

The stagnation and depreciation of the federal minimum wage over the past four years has failed to keep up with the cost of living, leaving some working families to rely on government aid to survive.  With income inequality and productivity on the rise, it is long past time to give minimum wage workers a pay raise, advocates of the bill contend.  But opponents argue that employers may higher fewer workers if minimum wage is hiked, possibly meaning fewer jobs for unskilled workers.

A minimum wage increase would be a pay hike for as many as 30 million Americans and offer tipped workers their first raise since 1991.

Republican leaders have indicated they will oppose any increase in the minimum wage, even though 65 Republicans currently serving in Congress voted for the last increase, which was signed into law by President George W. Bush in 2007.