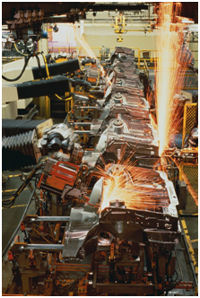 July 1, 2012 (Washington, D.C). —In 1960, manufacturing accounted for 28 percent of jobs in the United States. Today, manufacturing accounts for only 9 percent of jobs.  “
This dramatic decrease has limited job opportunities for all Americans. Worse yet, with the globalization of manufactured goods, the U.S. consumer has become desensitized to the “Made In America” label,” Congressman Duncan Hunter said. To bring attention to the declining manufacturing sector and promote U.S.-made goods, representatives Brian Bilbray (R-CA) and Hunter (R-CA) have introduced a bipartisan resolution to designate the first week of July as “Buy American Week.”
“Buying American is the easiest way to stimulate the economy without using taxpayer dollars. By educating consumers of the larger impact of their spending habits, they can play an active role in moving the economy and producing jobs,” stated Rep  Bilbray. “The resolution contains no mandates or costs, it simply encourages all Americans to support domestic manufacturing by making a conscious effort to buy American and promote our economic independence,” added Bilbray.
“This resolution is a call to action for every American,” said Rep. Duncan Hunter. “Supporting domestic manufacturing is something we should all do, regardless of the time of year. But, with our nation’s birthday right around the corner, it’s important to remind consumers of America’s history and the fight for freedom and economic independence. The U.S. economy is still the strongest in the world, and our workforce is second to none. Buying American this Independence Day is an excellent way of supporting our nation’s manufacturers and workers, and it reinforces the importance of the manufacturing base to the U.S. economy.”

The House Resolution includes bipartisan support from 12 members of Congress including notables like Representatives Marcy Kaptur (D-OH) and Tim Ryan (D-OH).  Along with California, Ohio has been hit particularly hard with the loss of manufacturing jobs.