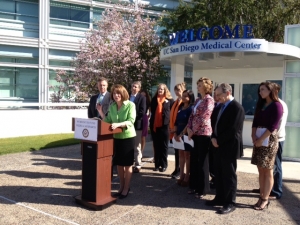 March 18, 2014 (San Diego)-- Reps. Susan Davis and Scott Peters, along with members of San Diego’s medical research community have joined together to call on Congress to increase federal funding to the National Institutes of Health (NIH), which funds critical medical research.

Budget cuts threaten this research and San Diego’s economy. Rep. Davis is leading a bipartisan effort by asking her colleagues to add their names to a letter to convince appropriators to allocate $32 billion to fund NIH grants in fiscal year 2015.

“San Diego is the cornerstone of medical research in the fight against deadly and debilitating diseases,” said Rep. Davis. “Virtually everyone knows someone who is struggling with a disease where NIH funding is used to find a cure.  In recent years, we have seen that funding threatened by budget cuts, which affects medical advancements and our local economy.”

“Providing robust funding for the National Institutes of Health (NIH) is necessary for our country’s long-term competitiveness,” Rep. Peters said. “In San Diego, our universities and research institutes both large and small rely on NIH for the grant funding that allows them to do their work. If we want to make sure that the next discoveries are made here in America, and that the best and brightest scientists in the world that we educate and train choose to stay here, we need to get NIH funding back on track. I’ll keep pushing with this bipartisan coalition to get it done.”

So far, more than 56 members of the House of Representatives have signed the Davis letter. San Diego County receives about $800 million in NIH funding every year. The funding grants from the NIH flow to thousands of scientist in laboratories throughout the San Diego region.

Medical research. Money from China? Drug companies spend a lot on research and development and it takes years of trials to get a new drug approved, but the Gobment don't pay fer it. You do. Oh, you have health insurance? Then your insurance pays for your meds. and the cost of developing them. So, you want everything owned by the people? Like the Peoples Republic of China? I'm with you, comrade.
while I agree with and understand the need for medical research, there comes a time when enough is enough from the taxpayers pockets. why does government need to spend more and borrow from china to provide funding for any organization? time to live within our means, also any and all medicines or treatments that make money down the road should be fully owned by the funding source, The People. lets' get smarter with our dollars, not just spend to feel good.