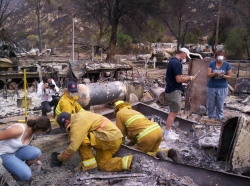 Update: A stopgap measure has been approved to fund FEMA partially through Tuesday, but at lower levels than the agency says is needed.

September 23, 2011 (Washington D.C.) – The Federal Emergency Management Agency (FEMA) will run out of funds early next week, leaving victims of recent tornadoes, hurricanes and wildfires without help unless Congress takes action. Republicans in the House refused to approve a stop-gap spending bill passed by the Senate and instead, voted on their own bill with sharply reduced funds for the cash-strapped emergency response agency.

San Diego Republicans Duncan Hunter, Brian Bilbray and Darrell Issa all voted for the measure, which failed by a narrow margin. If no measure is passed by both houses soon, the government faces a potential shut-down and disasater victims may be left to fend for themselves.

The bill was only a stopgap meant to keep the government running until November 19, while the “Super Committee” completes its proposals for long-term budget reforms. But the measure was defeated in a 219-203 vote.

The Democratic-controlled Senate has balked at a GOP-proposed compromise that would increase disaster funding partially, while still leaving FEMA underfunded at a time when some of the worst disaster in recent history have struck widespread areas, leaving many Americans homeless.

The compromise sought to pay for the partial restoration of FEMA funds by taking money from a federal loan program for manufacturers of fuel-efficient cars, a program signed into law by President George W. Bush. Supporters say cutting the program would eliminate 10,000 manufacturing jobs. Fuel-efficient cars also lower greenhouse gas emissions that the majority of scientists believe are causing increasingly large and severe storms as well as drought that results in wildfires.

FEMA already suspended payments for earlier disasters to fund urgent cleanup after Hurricane Irene. The disaster relief agency, which helped survivors of the 2003 and 2007 wildfires here in San Diego’s East County, says it has been forced to delay $447 million worth of project payments to help victims in 42 states. In some areas, such as North Dakota, victims face the prospect of being unable to rebuild their homes this year once the ground freezes come winter—and being literally left out in the cold.

We can only hope that these representatives are gone from Congress when the "BIG ONE" shakes San Diego County. If they follow their beliefs, they will vote "NO" on disaster aid for their own constituents. Unbelievable!