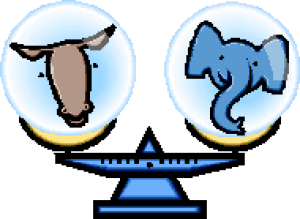 May 31, 2014 (Sacramento)--California is becoming bluer – leaving Republicans singing the blues.

According to the Secretary of State, the number of registered Republicans in California has plummeted, while Democratic registrations have held steady.

Today, About 43.5 percent of voters are registered Democrats – about the same as a decade ago.

But only about 28.6 percent of California voters are registered as Republicans – down from 34.7 percent 10 years ago.

Meanwhile the number of voters who list NO party preference has grown to 21.1 percent – and if the trend of the past decade continues, voters with no party preference may soon outnumber Republicans, the Sacramento Bee reports.

That trend holds true in San Diego County, where Republican registration declined by 20% in the last ten years.  Out of over 1.5 million voters in our county, less than a third of them are now registered to vote Republican.

In fact that’s true all over California, where out of 58 counties, 56 of them lost Republican registrations. Only two– Lassen and Modoc- showed registration gains for the Republican Party over the past decade.  Democrats currently control the Legislature, the Governor’s office and every single statewide office in California – a trend that doesn’t seem likely to change significantly as voters increasingly shift away from the GOP.

One factor is likely the state’s rise in Hispanic voters, many of whom have been disenchanted by conservatives’ staunch anti-immigration stance.  California voters also tend to poll more liberally on social issues than the GOP platform.  Still others may recall the days of gridlock in Sacramento over budget stand-offs before Democrats gained a two-thirds majority to pass budgets without a single Republican vote. Though Democrats recently lost that edge due to legislators under indictment, upcoming elections seem unlikely to shift the balance of power significantly back into the Republican court unless the GOP finds ways to attract a broader base of voters in California.