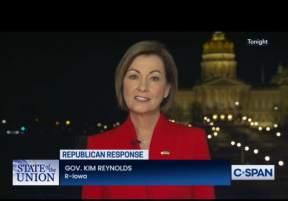 By Kylie Dees; Miriam Raftery also contributed to this report

March 2, 2022 (Washington D.C. ) – On Tuesday, March 1st, in response to President Biden’s first State of the Union address, Iowa Gov. Kim Reynolds delivered the Republican rebuttal. Reynolds began by stating that “instead of moving America forward, it feels like President Biden and his party have sent us back in time.” She claimed that the President has failed to make America respected around the world and united as a whole, while Biden’s main priority is to make America united once again.

Reynolds said, “It’s time for America to once again project confidence; it’s time to be decisive. It’s time to lead.” She added that America cannot project strength abroad if we are weak at home. Her speech pointed out what she viewed as weaknesses as well as strengths to build on.

Inflation has soared to a 40-year high, according to Reynolds, and has been a huge priority for Biden to get prices ‘under control.’ Reynolds blamed inflation on Democrats spending trillions as well as energy policies that have prioritized alternative fuels over increasing domestic oil and gas production, which she faults for rising gas prices.

Biden by contrast, indicated in his speech that inflation was largely due to increased demand for goods as the nation emerges from the pandemic and factories struggle to hire enough workers to keep pace.  Russia’s invasion of the Ukraine and sanctions impacting Russia, a major oil and gas producer, have also contributed to rising prices.

Another big topic that Reynolds talked about was taxes. She accused Biden of giving “billions in tax giveaways to millionaires and billionaires in Democrat controlled states like California, New York, and New Jersey.”

On the other hand, Biden stated in his speech that many corporations earned $40 billion in profits, yet paid zero dollars in federal income tax, and he plans to fix this entirely by proposing a 15% minimum tax rate for corporations. Biden aims to close loopholes so that the extremely wealthy do not pay a lower tax rate than a teacher or firefighter.

Reynolds claimed that we live in a country that is out of control where liberal prosecutors let criminals off easy and the world is more violent than it ever has been, though she cited no statistics or source.. She even states that, “many prominent Democrats want to defund the police.”  But that conflicts directly with Biden’s words. In his speech, he stated, “The answer is not to defund the police. The answer is to FUND  the police.” His goal is to fund the police with the resources and the correct training they need to protect our communities better while also holding police accountable for their actions.

Reynolds also criticized Biden’s handling of the pandemic, arguing that mandates, lockdowns, and school closures were not the answer, and resulted in a lot of children experiencing feelings of isolation, anxiety and depression. In many states, kids were left behind and “may never catch up in school.” This is why her home state, Iowa, was the first of many to require schools to remain open. Because of this, she indicated that Republicans are leading a pro-parent and pro-family revolution because “Parents Matter.”

Reynolds made it a big point to criticize the Biden Administration for  refusing to secure the international border with Mexico and provide adequate resources to stop human trafficking and even the income of deadly drugs. But she made a factual error when she stated, “We’ve actually gone to the border, something that our President and Vice President have yet to do since taking office.” In fact, Vice President Kamala Harris visited the border on June 25th, 2021 and met with immigrant girls to check on humanitarian conditions.

She claimed that Biden has not achieved any of his promises he made when he initially took office because many things have gotten out of hand, an exaggeration since Biden has had some legislation successes, such as enactment of his landmark infrastructure bill.  Gov. Reynolds concluded that Republican community across the nation are coming together to show Americans what a conservative leadership looks like. This includes characteristics such as what it means to hear people out, respect them, and to stand up for them. She believes that Americans can make their own decisions for their families and futures.

On foreign policy, she slammed the Afghanistan withdrawal for costing lives.

On one point, however, Gov. Reynolds found agreement with Biden. “Now all Americans must stand united in solidarity with the brave people of Ukraine as they courageously defend their country against Putin's tyranny. As they fight for their freedom,” she concluded.

Her statement stands in contrast to the Republican Party’s presumptive nominee for the 2026 presidential race, however.

On the eve of the invasion, former president Donald Trump praised Putin as “genius” regarding Ukraine and said that the Russian president had made a “smart move” by sending “the strongest peace force I’ve ever seen” to the area.  Immediately after the invasion, Trump doubled down, again praising Putin for taking over a country for the cost of sanctions. “I'd say that's pretty smart.”

The United Nations has voted overwhelmingly to condemn  the invasion as a violation of international law; human rights groups have since accused Putin of using banned weapons, clearly not a peacekeeping force.

is out of touch of what the majority of the people want, because she is drinking the right tRump cool-aid. the right refuses to give the 81,284,666 people who voted for biden any credit because the right still believes the election was stolen. time for reynolds to go away.