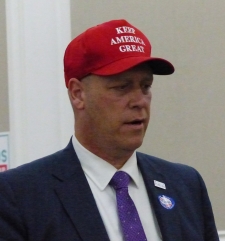 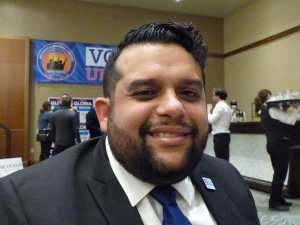 The gathering of Republicans, Democrats and others, at Golden Hall  election nights, is a long-standing tradition in San Diego. Democrats and republicans alike hosted parties within walking distance, the same venues as 2018. Republicans returned to the Grant, and democrats to the Westin, for more partisan celebrations among the like-minded.

Both the Republican and Democratic County Chairs were upbeat with East County Magazine.

“We are cautiously optimistic,” said local Republican Chairman Tony Krvaric, at the Grant early in the evening, continuing, “We did a great job of turning out voters.”

Will Rodriguez-Kennedy, Chair of the San Diego County Democratic Party, said, “It's a strong night for us from the East Coast to the West,” as polls close first on the east coast, and lastly, in the west. He believes the electorate is warming up to Vice-President Joe Biden.  Locally, Kennedy said having Democrats leading in San Diego district 5 and 7 races is "amazing."

James Elia has been campaigning for Bernie Sanders and told East County Magazine, “Bernie is the most popular politician in America. And we need that to beat Trump.” 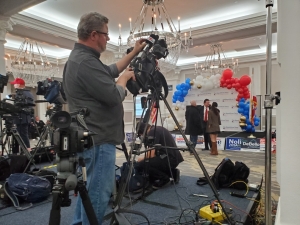 Andrew Hayes was celebrating the defeat of Measure R, $33 million in bonds for Lakeside Union School District, failing 60% no and 40% yes. “I was the lone no vote [on the commission]. I think Lakeside is representative of what people are feeling in this state. We're done with taxes. No more tax increases.” Hayes credited 2,000 volunteers who knocked on doors for the resounding defeat.

Back at Golden Hall, David McNees, who works in the District Attorney's Office in the readiness department, explains his interest in attending. "A friend of mine is running for Judge, J.C. Mody. I'm here to support him. I've known Michelle Ialeggio and J.C. Mody for many years. When you work with someone you learn their ethics and dedication, and that's why I'm voting for him.”

Both of his candidates are winning. Ialeggio is winning with 76%, and trounced Shawn McMillan, whom the County Bar Association deemed “lacking qualifications,” and Mody has a 10 point lead. 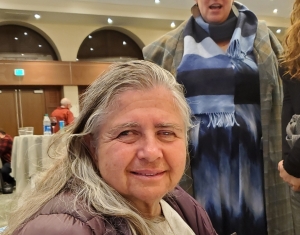 Michelle Krug (photo, left, by Rebecca Jefferis-Williamson) worked for the City of San Diego for 30 years, and like many celebrating at the Westin, active in the democratic party both locally and state-wide. "I'm here for a number of candidates,” she says.

John Vogel, (20%) will advance to a run-off with Lorena Gonzalez, (68%) in the state Assembly 80th district. “If elected it would be my top priority,” he says, of repealing Assembly Bill 5.

In East County legislative races, Democratic Assemblywoman Shirley Weber (62%) will head to a run off against John Moore (20%) after defeating Carmelita "C.J." Larrabaster.

Incumbent Republican Randy Voepel  (62.28%) and Liz "Elizabeth" Lavertu, Democrat (36.72%), will head to a run off despite Voepel capturing nearly two thirds of votes.

Sal Giametta, a former Assistant to Mayor Maureen O'Connor, San Diego Tourist Authority, and the County of San Diego, summed up some common confusion. “The rules changed regarding the elections for state legislative seats, and are very different now where the candidates who wins the race with 50% advances to the November vote.”