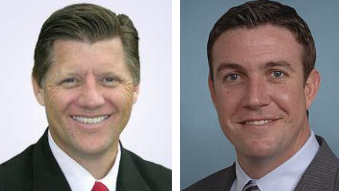 October 17, 2019 (San Diego) – It’s rare for a political party to withhold endorsement of an incumbent.  But on Monday night, the San Diego Republican Party Central Committee opted against endorsing indicted Congressman Duncan D. Hunter, or any of his three Republican rivals.

However, in the last of four ballots, State Senator Brian Jones received the most votes, the San Diego Union-Tribune reports, while former Congress Darrell Issa did not receive a single vote. Radio host Carl DeMaio reportedly won a first-ballot round, but was later eliminated from consideration.

Both Hunter and Issa appealed to the group not to endorse anyone and let voters in the March 3 primary race decide who they want to advance to the November 2020 general election.

Endorsing Hunter might have proven problematic, if he winds up convicted and imprisoned after his late-January trial on 60 counts of federal corruption. He is accused of spending a quarter of a million dollars in campaign donations on personal uses ranging from family vacations to overnight trips with mistresses.

Neither DeMaio nor Issa lives in the district – a fact that may have swayed some to vote for Jones, a State Senator and former Assembly who already represents many of the Congressional district’s voters, since there is a substantial overlap in the state legislative and Congressional district boundaries.  Jones has a clean record free of scandals and a solid conservative voting record.

All four candidates were asked a series of questions and all four took party-line conservative stances on issues ranging from abortion to immigration.

In the fundraising department, DeMaio leads with over $1.5 million raised and $1.2 million on hand after expenditures. Neither Issa nor Jones had established campaign committees by the filing deadline for the last financial reporting, however Issa, long the wealthiest member of Congress before retiring from the 49th Congressional district, is expected to have the means to self-finance a campaign. Jones has a successful track record of fundraising in his legislative races.

Any of the three might be better financial bets for the GOP, since Hunter’s campaign has struggled financially, ending the last quarter with $427,431 in debt as his legal bills continue to mount. Federal law allows him to continue to spend campaign donors’ money on his legal defense, since his alleged crimes involved campaign money, unless he resigns or is convicted.

In contrast to the fractured fracas at the GOP in the race, Democrats have endorsed Ammar Campa-Najjar, the only Democrat running for the 50th Congressional district.  Campa-Najjar has raised over $1.3 million for this election, with over $850,000 cash on hand from contributions averaging $25. Campa-Najjar, a Jamul resident and business owner who has worked in the U.S. Labor Dept. and for the Hispanic Chamber of Commerce,  came within three points of ousting Hunter in the 2018 election.

The local Republican party did make other endorsements, notably backing former State Senator Joel Anderson instead of Poway Mayor Steve Vaus in the race for County Supervisor in District 2, where Dianne Jacob leaves office due to term limits.

Anderson has been a powerhouse fundraiser for the party through the years, serving in the State Senate and Assembly before losing his last election bid for the state Board of Equalization. His endorsements include Rep. Duncan Hunter, former Governor Pete Wilson, Santee Mayor John Minto, and State Senator Brian Jones.

The Democratic candidate in the 2nd Supervisorial race is Kenya Taylor, a Rancho San Diego resident with a background in behavioral health and community activism.