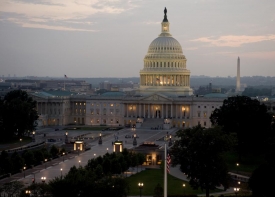 November 5, 2014 (San Diego) -- Nationally, Republicans have won control of the Senate and increased their margin of dominnance in the House of Representatives. One of those gains appears to have occurred in San Diego's 52nd Congressional District.

With all votes tallied except several thousand provisional ballots, former Councilman Carl DeMaio, a Republican, has just 752 votes more than Democratic incumbent Scott Peters, up by 50.26% to 49.74%.  It is not yet known whether Peters will request a recount, which is his right under the law with such a narrow margin.

In other local races, Republican Congressman Duncan Hunter captured 71.55% of the vote over challenger James Kimber, a physician assistant in the 50th Congressional District.  In the 51st District, Democratic Congressman Juan Vargas scored a solid victory with 68% of the vote over his opponent, Stephen Meade.

Two other races were somewhat closer. Congresswoman Susan Davis, a Democrat, fought off a challenge from ex-Navy Seal Larry Wilske, a Republican. Davis won with 57.88% of the vote in the 53rd District; Wilskie picked up  42.12%. Congresman Darrell Issa, a Republican who has drawn national media scrutiny as chair of the House Oversight Committee held his seat with 57.97% of the vote over Democratic challenger Dave Peiser, who receivecd 42.03%.

DeMaio may have benefitted from national dissastisfaction with Congress and the Obama administration, factors that helped Republicans score victories in several national races.

Congress has been beset by gridlock for the past two years, with House Republicans blocking most administration and Democrat-backed efforts at reforms, while Senate Democrats similarly kept Republicans' key legislation from coming up for a vote.  With Republicans now firmly in control of both Houses of Congress, the President can veto legislation, but may be reluctant to do so on omnibus bills such as measures to keep the government funded and increased compromise is likely to get vital measures approved. The President is not expected be able to get confirmation for key judicial or cabinet appointments with Republicans running the Senate.

As for policy changes, Republicans will likely work to cut the federal budget, emphasize fiscal respohsibility and boost business-friendly tax breaks.  The Republicans may also strive to pare back or privatize Social Security and impose restrictions on reproductive rights including abortion, long-stated goals of theh party.

Expect climate change action to be pushed to the back burner, since the GOP is dominated by climate change deniers. Instead, look to Republicans to seek approval of the Keystone Pipeline and increased oil and gas production domestically, along with renewed emphasis on nuclear power, in contrast to the Obama administraiton's renewable energy emphasis.

A thorny issue for Republicans and all members of Congress to grapple with will be how to handle the crisis in Iraq and Syria.  A year ago, the vast majority of American voters polled wanted troops withdrawn from Iraq.  But after withdrawal, ISIL terrorists seized control of a broad swath of the region, declaring an Islamic state, slaughtering those who refuse to convert to Islam and even some Islamic tribes in conflict with ISIL goals.  The President launched air strikes; some denounced these while others including some local Republicans have called for ground troops to be sent into the region.

Congress adjourned without voting on a war declaration or whether to lift the immigration cap on persecuted religious minorities seeking to come to America.  The new Congress will now need to decide how to handle these important issues and others when it convenes in January.

I don't pretend to understand the news business. I read an article and get a sense of what the author is trying to say and how they are saying it. I don't need to understand the grocery business to recognize that the fruit they are offering for sale is rotten. I suppose you would feel the need to defend the grocer just because he or she shared your same limited view of the world. If you are the grocer, then I understand that you feel rotten fruit has a use too, and somebody is going to buy it. Most of the time rotten fruit is just rotten fruit, and I'm not buying!
There is no equivalency between the sustained national (and bi-partisan) coverage of Mr. Issa's behavior as Chair of the Oversight Committee and Mr. Potter's quote on Ms. Davis' travel as published in the Reader three years ago. The writer referred to the national-level coverage of Mr. Issa because it is current and it is newsworthy. The suggestion that the reference was made solely because of Mr. Issa's party affiliation betrays a very feeble understanding of the news business. Most of the time a cigar is just a cigar; and the news is just the news.
"Congresman Darrell Issa, a Republican who has drawn national media scrutiny as chair of the House Oversight Committee" It is this kind of subtle but cheap comment that damages ECM's credibility. For example, while reporting on the Susan Davis race you did not say, Congresswoman Susan Davis, a Democrat, "the most frequent junketeer of the county's House delegation, both Democrats and Republicans", won with 57.88% of the vote. The junketeer quote is from Matt Potter, the San Diego Reader, October 17, 2011. I'm sure the slight to Congressman Issa was unintentional, as would the slight to Congresswoman Susan Davis have been, but surely you must admit it seems partisan when only the Republicans get the jabs. We all have room for improvement and I am just trying to do my part. I really want ECM to be exactly what it claims to be, because it really is a great place for community information. Thanks for striving to be a great source of news for East County.