The memorial service for my grandfather, Vernon Wahrenbrock, was sparsely attended; the inevitable consequence, I suppose, of his having lived nearly a century. All his friends and much of his family were gone. We, his survivors, were there of course. And so were a few of the folks he'd come to know at the rest home. But the only other person to pay his respects that day was Chuck Valverde. It was February 18th, 2008 and already he was pale and thin. Still, I had no way of knowing that within six months I and hundreds of others would be attending a memorial service for Chuck himself.

The link between these very dissimilar but remarkable men was, of course, Wahrenbrock's Book House – the shop my grandfather founded in 1935 and that Chuck had operated (and later owned) since 1967.

Wahrenbrock's had always been the flagship of San Diego's used bookstore fleet and one of the best used bookstores on the West Coast. Recently, many San Diegans were shocked and saddened to hear that the store itself was gone – its doors closed forever.

The store's sudden demise, falling as it did hard on the heels of its owners' deaths, has provoked thought and memory. Is this simply a reflection of the timing? Smack on the front page of the San Diego Union-Tribune was the story of a small business – Wahrenbrock's – gone south. Why? Other failed ventures don't get that kind of attention. Sure, at 74 the shop was old – at least by San Diego standards. But no one had paid any attention to my father's business when it closed back in the nineties, and it had been around since 1896. No, there was something about Wahrenbrock's, and perhaps about used bookshops in general (which have been steadily disappearing for twenty years or more) that led to all the attention and caused our city's collective lament. I think I know the answer, but my explanation will require a brief detour through the past.

I, too, was destined to become a used bookman. On one occasion during my informal yet invaluable apprenticeship with Brian Lucas at Adams Avenue Bookstore a co-worker, while casually thumbing through a volume said, “You know, this is a pretty durable piece of technology.” He was right. The technology to which he referred was the codex book – the book as we commonly know it. I was amazed at the profundity of that simple observation.

In ancient Greece and Rome, books had been printed on long rolls (think of cellophane or aluminum wrap) called scrolls. This made the reproduction of them (not to mention dog earing favorite pages!) very difficult. But even after the eighth century when most them had been copied into codex form – individual pages sewn or glued at one edge to a spine with hinged boards – the difficulty of reproduction remained. However, both the inconvenience and the scarcity of this commodity were offset by the paucity of need; few people could read. Literacy was largely the province of clerics and scholars. 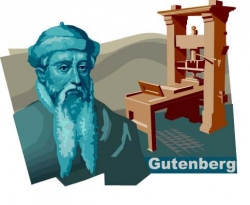 It wasn't until around 1450 when Gutenberg invented moveable type that this technical difficulty was overcome and in what must be one of the most momentous historical coincidences of all time, Gutenberg's innovation coincided with the work of another man whose teachings would create for it an inexhaustible market: Martin Luther. Luther's theology made the Book – the Bible, that is – more important for believers than the Church itself. And this, of course, meant that people must become acquainted with it, must read it. In short, for Luther and his followers reading was close to being a prerequisite for knowing God.

Talk about an incentive! But whether Luther was right or wrong, one can easily imagine the effect this doctrine had on the then fledgling publishing industry. Printing presses popped up all over Protestant Europe, and by the beginning of the sixteenth century, had produced over nine million volumes! A revolution had occurred and one of the chief instigators was the need to read. Literacy began to spread, and the world would never be the same.

As Europe's greatest progeny, America could not help but share in the culture of the book. Here, the changes that began with the Protestant reading revolution received the added impetus of powerful political theories that clearly delineated the natural rights of individual men. Included among these was, of course, self-governance and this in turn required that every citizen be at least minimally acquainted with its fundamental principles. Red schoolhouses sprang up from east to west and the teachers in them helped their students learn. But the primary vehicle of learning was always the book. It would be no exaggeration to say that from colonial times through at least the first half of the twentieth century the heart, mind and soul of America was formed by books.

...Was formed. But is it still? Since the Second World War many have been skeptical and not without reason. Already hurt by the pseudo-philosophical “post-modern” literary theories still fashionable in academia (one all-too-representative professor I had the misfortune to speak with told me that he teaches his students that Shakespeare, comic books and a deck of playing cards all possess the same degree of literary merit), books and reading have been further damaged by electronic competitors: movies, television, and most of all, the Internet.

Advocates of online reading argue that literature will still be read and that only the medium – not the message – has changed. But when these same tools can with equal ease, and in a split second, conjure up games, videos, movies, photographs, TV shows, phone conversations and every other conceivable form of cheap digital distraction, it’s difficult to see how attention-demanding literature can keep up. Veteran Wahrenbrock's bookseller Jan Tonessen put it concisely: “We're going from a culture that was once dominated by this – and he pointed to the words on a page – to this” – and he then motioned to a photographic image.

In a recent lecture at Rice University, another skeptic, America's best known bookseller and Pulitzer Prize winning author Larry McMurtry, mourned what he sees as the end of an era. “My theme is a sad one. It's the end of reading. I had always thought that books may end, but reading would not. I'm not so sure anymore.” He continued, “It's just sad that what is being left behind is a very beautiful culture, the culture of the book. I think it's gone, I don't think it will come back,” he said. “My bookshop has become a temple. It's not…commercial real estate anymore. They come in and hold a book as if they're holding a talismanic object from a past culture. And, in a way, they are."

Sure, many people will continue to buy books on line. But utterly absent from such impersonal, sterile transactions is the irreplaceable experience – the romance of browsing – with all of the attendant smells and textures among out-of-print books on old wooden shelves and the ever present possibility of stumbling across that unexpected work of genius.

And public libraries will probably continue to exist in some form or other. But they too are increasingly yielding to popular demands for contemporary media, and ultimately this means fewer books. Just a few weeks ago, a customer asked me if I had a specific volume from Will and Ariel Durant's magnificent The Story of Civilization. He said he tried to find it out at the library but was told that they no longer carry the set. The reason: it wasn't popular enough.

Wahrenbrock's Book House was San Diego's oldest and most distinguished inventory of "talismanic object[s] from a past culture.” The question that faces us in the wake of its demise is not can we survive without stores like it, but what must we be if the answer is yes. What are we without the past? Until recently America, along with the rest of the West, had been guided by the seminal ideas, emotions and desires in the stories, poems and chronicles that silently and unobtrusively reside between two covers, until they are opened. So far we have only had a foretaste of what will happen if they remain closed, and it is bitter.

Craig Maxwell is the proprietor of Maxwell’s House of Books in La Mesa Village.

I've been proud to call Mr. Maxwell my friend for almost 30 years. Through that association, I was fortunate to meet his grandfather, Vernon on many occasions and hear his tales of old...and the "frontier" days in San Diego and his frequent trips to baja in a model T. He was a man born of another time... Gun slinging, self reliant, self made and outspoken. I only came to know him when he had already entered his twilight and his legacy and legend had become bigger than the man, but I think it would have been something to know him in his prime, when men were kings and their books the voice of god... Or truth... Or myth.

Sadly, as Craig wrote so eloquently, those days are gone... And so it also may be the fate of reading.

I have to say that I never had a inate love for reading... As I was brought up mostly on TV, but I believe my appreciation for books and reading surely began because of my friendship with Craig and his family.... All voracious readers. And in no small part I'm sure, a debt of gratitude must be paid to Mr. Wahrenbrock for planting those seeds and so many more.

I can't help but note the deep irony that I type this comment on my "new tangled" iPhone, after reading said article on the same. As I am surely becoming addicted to this gadget as most are now, I wonder if I actUally read more now than ever before... Albiet maybe often junk and Viagra emails, I actually manage to squeeze in some substance on occasion.

I do miss the look and feel of a great book... The viscreral experience of binding and paper is unmatched. And, I thank my old friend for sharing his love of books and great ideas and reminding me, once again, why they are so important to our lives and legacy ... And with any hope for our children as well.