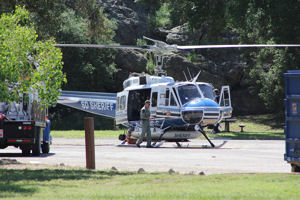 Story and photos by Billy Ortiz
Video by Billy Ortiz and Pam Wilmers
April 9, 2012 (Lakeside)—San Diego Sheriff’s Fire and Rescue performed a hoist rescue off the east face of El Cajon Mountain (known locally as El Capitan) today.  Leonard Pierini, 65, of Poway told ECM videographer Billy Ortiz that he was hiking alone, although other hikers were in the same area.  View a video: http://www.youtube.com/watch?v=omaz5TEpZrs
Mr. Pierini explained that he reached a spot three-quarters of the way up when he could no longer go up or down. Around 10 a.m.he was forced to 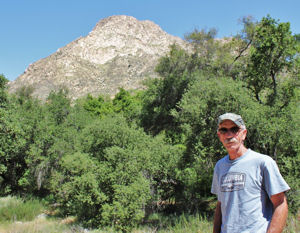 call the Sheriff's dept to help him off the mountain. Pierini, a Vietnam Veteran, was not hurt in the incident and was in good spirits despite his ordeal.  He said he would return at a later date to try again, but on an easier trail.
El Cajon Mountain, 25 miles east of downtown San Diego, is a popular hiking and rock climbing spot because of its very steep terrain. The ascent to the face summit is approximately 2200 feet in less than 1.5 miles, a rugged climb for less experienced hikers.

wonder if he is gonna receive a bill in the mail for that one?