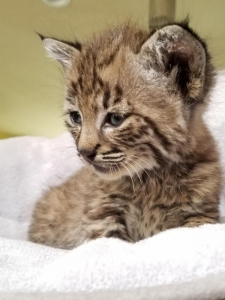 April 14, 2017 (Alpine) — Diego, an emaciated baby bobcat dropped off at a pet hospital in Rancho Bernardo in late March and later taken to Lions, Tigers and Bears (LTB) sanctuary in Alpine has been moved again, this time to a northern California rehabilitation facility.

Bobbi Brink, founder of LTB, has voiced concerns over California Fish & Wildlife’s decision to move the cub to a facility that hopes to eventually release the young cat back into the wild. She notes that when the bobcat was dropped off at the animal hospital by people who refused to leave their names, the cub already knew how to feed from a bottle and seemed used to human contact, so may have been an illegally bred, captive exotic cat.

LTB does not accept animals that can be accepted and released into the wild, instead finding rehabilitation centers to accept such animals. But when Brinks called two local wildlife rehabilitation organizations, she was told that baby bobcats need to be with other cubs to be rehabilitated and released.  None were available locally, meaning other local facilities would likely have euthanized the cub, says Brink.

“Our own vet confirmed that the week-old bobcat would need human intervention to an extent that it would bond with humans, greatly reducing its ability to survive in the wild,” said Brink, who then agreed to accept Diego at her sanctuary as a safe haven for life.

Brink obtained permission from California Fish and Wildlife to pick up the baby bobcat, which did not exhibit any fear of humans or other natural behavior of an animal found in the wild. LTB’s staff bottle fed the cub every three hours and of necessity had intensive human contact.

“Animals like Diego that are fed by humans, especially in their early developmental years, are more likely to approach humans if they are released into the wild. Wild bobcats that have had no human contact typically avoid humans and will not attack one unless cornered. Bobcats that have had too much human contact may approach humans and will bite anyone, even a child, to get to a food source,” says Brink.

But on April 6th, CFW reversed its decision and sent a game warden to pick up the young cub, which has not responded to Brink’s request for a conference call with parties who made the decision.

The northern California Wildlife Education and Rehabilitation Center (WERC), now has a bobcat available to pair with Diego, who will be isolated from human contact and eventually released into the wild if his rehabilitation is successful.

“Although Lions Tigers & Bears cooperated with Fish and Wildlife in turning Diego over, we do not believe that this is in the best interest of Diego or public safety,” Brinks says in a statement sent to media. “After giving us permission to provide a lifetime home in captivity for Diego, it seems inhumane for California Fish & Wildlife to change their mind and then throw him into some sort of isolation deprogramming from human contact so that he can be released.

“Lions Tigers & Bears agrees that, if he truly was a wild-born bobcat, Diego should have been allowed to live its natural life as nature intended. If there was an opportunity for Diego to be rehabilitated and released into the wild, LTB would have never agreed to place him in a captive situation to be handled by humans during his recovery.”

Click here to read statements from the professionals involved in Diego's rescue.

If you find a bobcat or other wild animal, leave it where it is and do not touch it, even if it appears injured, Brinks advises. Contact Lions Tigers & Bears or a native species rehabilitation organization who will be able to safely handle the animal and maximize the chances of it being returned to the wild.

Do not purchase exotic cats from breeders. Not only is it illegal in California, but cats like Diego require special care and often end up in sanctuaries because their owners cannot care for them. Instead, contact a local shelter to adopt a cat in need of a home.