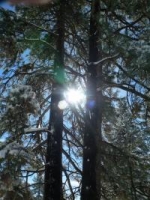 October 9, 2013 (Julian ) –Amid cold, stormy conditions, a ground search is being conducted by Sheriff’s Search and Rescue in the Julian area for a Piper Mooney plane.   The small plane took off from Palm Springs for El Cajon’s Gillespie Field, but never arrived.

“They’re starting a ground search up in the Julian command area,” Lieutenant Dave Schaller with the Sheriff’s office told ECM tonight.  “We’re unable to get ASTREA up in the air due to the weather.” Lighting has knocked the webcam atop Volcan Mountain offline and snow is forecast to dip down to around 5,500 feet tonight.  Volcan Mountain is 5,350 feet.

The plane’s pilot is from San Diego, said Schaller, was did not know if others are in the plane.  It was reported overdue for landing at 6:18 p.m.

ECM news partner 10 News reports that the plane’s last known location was near the Volcan Mountain Wilderness Preserve near Julian.