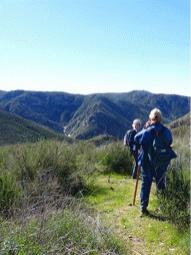 June 20, 2016 (Julian) – Yesterday, a small vegetation fire off Boulder Creek Road a half mile from Three Sisters Falls near Julian was swiftly doused. Palomar Hot Shots, helicopters, U.S. Forest Service and a Cal Fire air tanker attacked the blaze when it had charred only a quarter of an acre at mid-morning yesterday.

A sign at Perkins Store in Descanso, along the entry route to the falls, warned visitors that the falls were closed due to the fire.  But by mid-afternoon, NBC 7 news reported that three hikers were flown out of Three Sisters Falls due to heat-related medical issues, Cal Fire confirmed.

Hiking to the falls is not advisable during high heat due to the long, steep trail largely without shade. Many hikers also fail to carry adequate quantities of water, making Three Sisters Falls and nearby Cedar Creek Falls the scene of many rescues due to heat exhaustion through the years.