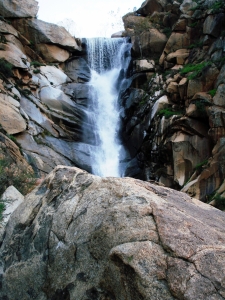 May 10, 2017 (Ramona) -- As temperatures begin to rise, so have the number of heat-related injuries and air rescues at the popular Three Sisters and Cedar Creek trails in Cleveland National Forest, the U.S. Forest Service reports.

Last weekend, as temperatures reached the high 80s, Forest Service personnel and volunteers assisted as many as 50 hikers, most of whom had little or no water.  Several required medical evacuations by air while others were carried out on foot.

Hikers should be prepared for unfavorable conditions. If hitting the trails during the summer months, avoid hiking during the heat of the day and bring at least one gallon of water per person. Wear light colored clothing, good hiking boots, and a hat to block the sun. Even at other times of the year, temperatures can still climb high and it’s always important to stay hydrated.

“Public health and safety remains one of our primary concerns. These closures remain the most effective way to reduce heat related injuries and ensure the safety of our public and first responders” says Forest Supervisor Will Metz. These closures are expected to occur frequently throughout the summer, so be sure to check with the Cleveland National Forest before hitting the trail, where permits are also required.

Construction was recently complete on the most challenging stretch of the Three Sisters Trail, providing a safer and more direct route to the falls, while alleviating the boulder-hopping and mountain-climbing that caused as many as seventy-five injuries last year.

Cindy Buxton
I chair the Forest Committee for Sierra Club San Diego but this was not written with their review or permission.

Don't people understand that some trails are simply not meant for amature hikers who are unprepared for this type of environment and terrain? They need to do some research on these trails Before heading out on a possible deadly trek. I wonder... who pays for their rescue, them, or the taxpayer? I have to assume (since I've never been there) the trail head has signs advising and warning about the dangers.