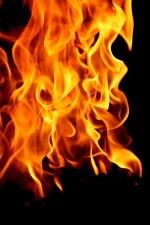 October 25, 2014 (La Mesa) –La Mesa Police have arrested an arson suspect linked to a fire late last night that displaced eight people from a home in the Rolando area.  Brad Bach, 58, of La Mesa has been booked into county jail for arson of an inhabited structure.  Damage to the structure and contents is estimated at $260,000, according to Heartland Fire.

Police and firefighters responded to the residential blaze at 11:42 p.m. last night in the 6700 block of Rolando Knolls Drive, La Mesa. Heartland Fire & Rescue crews from La Mesa and Lemon Grove engine companies, with assistance from San Diego Fire engine companies, arrived on scene and discovered heavy fire and smoke coming from the garage of a residence. Eight adult residents were safely evacuated from the residence and fire crews quickly contained and stopped the fire. There were no injuries to the residents or emergency personnel.

The Red Cross assisted the seven residents who were displaced by the fire.

Anyone with information is encouraged to call the La Mesa Police Department or Heartland Fire & Rescue. You may also call Crime Stoppers’ anonymous toll-free tip line (888) 580-TIPS (or www.sdcrimestoppers.com).  You can remain anonymous, and be eligible for a reward of up to $1,000 for information in this case