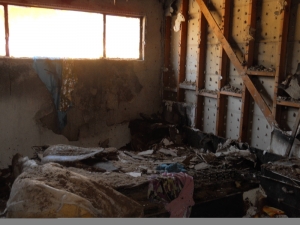 March 27, 2012 (Lemon Grove) -- At 9:11 a.m., Tuesday morning, Heartland Fire & Rescue crews from Lemon Grove, La Mesa, and El Cajon were dispatched to reports of a residential structure fire in the 1500 block of Skyline Drive.  A 911 call reported  a room on fire.  Fire crews arrived within 6 minutes to discover dark smoke coming from the front door and side bedroom window of a single story, single family residence.

Fire crews stretched hose lines to the interior of the house and aggressively battled the intense flames and thick smoke. The quick attack by firefighters confined the fire to a single bedroom, but there was extensive smoke damage throughout the whole house. 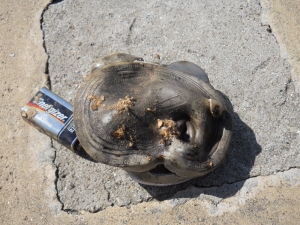 of the family of the fire, and he was able to get himself and his family out of the structure safely.  Though the smoke alarm sustained heat damage and was melted, it was still capable of alerting the occupants to the fire which allowed them to exit the building safely.  The smoke detector was still emitting the warning sounds as the firefighters entered the structure.

The cause of the fire is under investigation.  Damage to the structure and contents is estimated at approximately $75,000. The American Red Cross is assisting the three adults and ten children displaced by the fire.