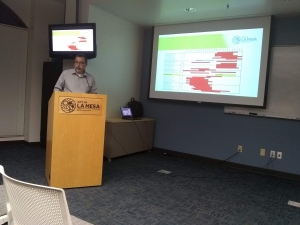 By Mike Allen
Photo, left:  Chris Gonzalez
March 1, 2019 (La Mesa) - After relocating the La Mesa Farmers Market from the Civic Center parking lot to La Mesa Boulevard last May, a lot of businesses on the main street of the Village cried foul, saying the Friday event was hurting their sales.
While the market certainly increased foot traffic to the Village, all the new cars took up valuable parking spaces, and caused some regular customers to stop visiting their establishments on Fridays, one of their busiest days, some business owners complained.
The city responded by undertaking a series of surveys and held public forums to explore alternatives, including a forum on Feb. 28 at the police station attended by 22 people.
Chris Gonzalez, the city representative heading up the effort to find solutions to the conflict, outlined possible options including changing the day, time, location and even the arrangement of the booths for the event that attracts many La Mesans as well as visitors to the heart of the Village.
After meeting with many of the impacted business owners, Gonzalez said, “They like the Farmers Market and want it to continue….Everybody wants to find a solution to make it work somewhere.”
For every possible change to the event, Gonzalez provided possible benefits and risks. When the presentation was finished speakers had a chance to weigh in.
The ultimate arbiters of what will be done is the City Council which is scheduled to take up the issue at its March 12 meeting. 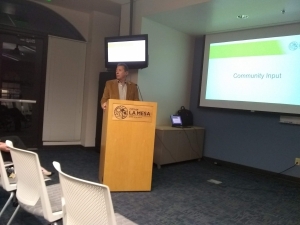 Peter Carzis (right), owner of Peter’s Men’s Apparel on La Mesa Boulevard, said he was against having the market at its current location. “The market should go back to where it was originally, and should get a new operator,” he said.
The original location on Allison Avenue has plenty of parking and would allow the businesses on La Mesa Boulevard to free up parking spaces needed for their regular customers, Carzis said.
La Mesa City Manager Yvonne Garrett said returning to Allison Ave. site wouldn’t work because the space is too small to accommodate some 55 vendors now participating in the event.
Two other possible locations for the market, Lemon Avenue and Palm Avenue, were ruled out because of the relative smaller width of those streets.
Moving it back to the Civic Center would provide enhanced visibility to merchants on La Mesa Boulevard, but would also greatly reduce both the number of visitors to the area and the number of vendors for the market, Gonzalez said.
Changing the day of the event to Tuesday or some other day, something advocated by 30 percent of the affected business owners, was also explored. But moving it would affect farmers and vendors who attend other markets around the county, likely resulting in fewer coming to La Mesa, Gonzalez said.
Of 39 market vendors responding to the survey, only 11 said they could do it on another day, he said.
Among established businesses on the boulevard, some of biggest critics to the Farmers Market were restaurants; owners said the Friday events cut deeply into their regular customer visits. One restaurant owner, John Bedlion of Johnny B’s Burgers Brew & Spirits, told the Council that he was losing between $1,200 to $2,000 in sales on Fridays.
But Brenda Leek, a partner in Curbside on La Mesa Boulevard and 3rd Ave., which opened in October, said the market has been terrific for increased visitations at the open air, American-grilled style restaurant.
“The exposure of the Farmers Market brings far more positives than the negative,” Leek said. All the criticism over the market seemed petty to her. “This is a sad waste of time. All of my customers are finding somewhere to park,” she stated.
Among other potential solutions were changing the way the booths face and adjusting hours for the market.
One possible change was putting the booths closer to the curb, and turning the opening towards the sidewalk, but that would put the booths right up to the front doorways of many of the businesses, further impeding views, some said. “It would have caused more problems than it would have solved,” Gonzalez explained.
As to the time, the market organizers agreed to delay setting up to 2 p.m., giving restaurants more of a window on their luncheon business. The market runs from 3 to 7 p.m.
Brian Beevers, the farmer’s market manager, said in addition to delaying the booth setups, the vendors agreed to remove large banners on booths, thereby improving visibility to existing merchant storefronts.
He said the market now has only six hot food vendors, so existing restaurants aren’t as impacted from those sales.
As a business owner of a gift shop in North Park, Beevers said he’s well aware of how public events can impede foot traffic and be disruptive, but he’s learned to live with it.
La Mesa merchants should be thinking of ways to maximize the boost of visitors to the Village from the market, and take advantage of new technologies such as texting ads or coupons, Beevers suggested.
He said the city has done a good job in working with the Farmers Market vendors and Village merchants to try to come to some solution.
“The city has been working very hard on this,” he concluded. “We’re pleased with what the city has done to find compromise on both ends, to try make it work for everybody.”