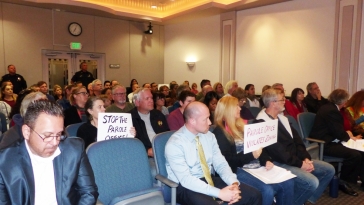 City Manager Yvonne Garrett explained that the city just received a letter days ago from the California Department of Corrections and Rehabilitation informed Council of the proposal to lease space for a parole office at the La Mesa site.  “We’ve reached out to the adult parole division and expressed concern about the uses and surrounding area,” she told the crowd.  A 60-day period for initial comment is underway.  Garrett said that following the  city’s expression of concern,  if it is still considering the La Mesa site, the CDCR will convene a meeting for the communication.

The CDCR says it wants to locate a office in East County, which currently has no parole office, because many parolees live there. The building would include 65 employees, of whom about 45 would be parole officers, each supervising dozens of parolees from a building with 41 parking spaces. Each parolee must visit the site at least once upon release from state prison and thereafter talk with their parole officer monthly either by visiting the parole office or having a parole officer visit the parolee’s home. 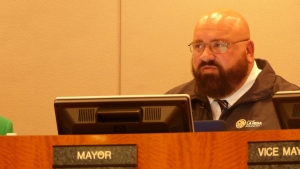 Mayor Mark Arapostathos announced that he has received 92 emails in opposition to the project and has responded to them all.  After the meeting, he told ECM that as a teacher, he is concerned about the safety of students at nearby schools and homes and dose not want to see a parole facility at the location.

The Council has been consulting with legal counsel to determine options but likely will have their oversight ability limited to enforcement of zoning/code violations. The item was not on the agenda, so

Council members by law could not ask questions or respond to speakers during the public comments session.

The first speaker on the issue was Susan Nichols, president of the Grossmont-Mount Helix Improvement Association, which represents 7,000 households and some 20,000 residents. Nichols said residents are “alarmed” adding, “Our neighborhood is more than 99 percent residential with “thousands of thousands” of single family homes and only a handful of b 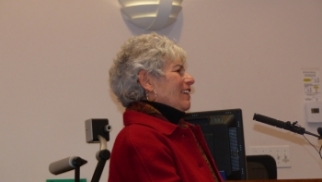 usinesses.  “This would negatively impact these houses and the community as a whole,” she said.

Nichols ([photo, left) She stated that if the facility opens, the state would close its Chula Vista office, leaving offices only in Escondido and La Mesa, so La Mesa’s facility would serve half the parolees in the county. “There would be immediate code enforcement issues,” she said.  Nichols further objected to the site because “the closest bus stop is near Grossmont High School and is used by students who would become targets” noting that parolees include sexual predators.

If parolees take the trolley, the closest stop at Amaya would have them walking past Mt. Helix Academy and through a neighborhood with no sidewallks, also impacting traffic, Nichols noted.  Newly elected La Mesa Councilmember Akilah Weber has a son who attends Mt. Helix Academy. 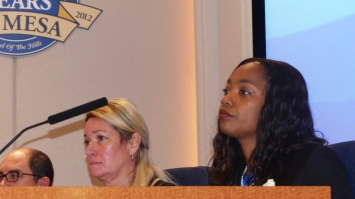 Councilmembers Baber, Alessio and Weber listen intently to the speakers.

“We are here to implore you to listen to your constituents and help stop this,” she said, then asked that the City Council convene a special meeting on the issue before January, or ask for an extension on the initial comment period which ends the first week in January.

Next to speak was Stephanie Boethin, who has done research and helped organize opposition to the project.  “You need to stand up for us. You need to be our David to stand up to Goliath,” she said, imploring the Council to “make sure that our children are safe.”

A psychiatrist next addressed the Council, indicated that he is past president of the San Diego Association of Psychiatry and has done work for the District Attorney and other criminal justice entities. He called it “exceptionally poor judgment” to locate the facility on the edge of a residential neighborhood.  He advised council that the rate of recidivism, meaning parolees committing new crimes, is 66 percent within three years after their release from prison and 75 percent after five years.

“Three thousand people coming into a residential area is foreseeable,” he said of the project, “ and 75 percent will reoffend.  You have pedophiles, sex offenders” as well as those who committed property crimes and other offenses.  “These are impulsive people,” he said, “not criminal masterminds,” adding that they will commit “crimes of opportunity.”  He said there is a reason why state prisons are located in isolated rural areas away from homes, schools and businesses. 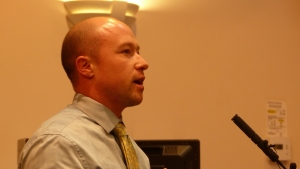 Daniel Boethin (photo, left), husband of Stephanie Boethin, stated, “We live less than b lock away” from the site. He started the Change.org petition opposing the facility. “This intensity of use has no precedent,” he stated. “Our daughter is two years old. I want to send her to that high school or have her in our front yard without having to worry about a parolee walking by.”

Barbara Bent, a native of Mt. Helix and the Grossmont area, said she would feel “unsafe” if the parole office opens.  An alumni of Grossmont High School whose grandchildren will eventually walk there to school, she told the Council in an emotional voice, “ I’m appalled and terrified.” She then recounted how she and her family were already victims of a midday home invasion  in which “my grown daughter was held at knifepoint while I was holding my 2-year-old grandchild. I don’t want that or anyone.”  She then admonished that if harm comes to even one student because of the parole facility,   that would be “unacceptable.”

Marian Hollingsworth said she’s raised four children here and it has “always been a safe, quiet neighborhood. “ Her husband is a former drama coach at Grossmont High School. She noted that there’s been no discussion of increasing police staffing, adding, “People are talking about arming themselves…taking things into their own hands.

Claudia Powell says her property is “extremely close” to the site and noted that there are no street lights or sidewalks, with winding narrow streets and no public transit.  She asked Council to please “help us in the unincorporated part of La Mesa understand how we can work with La Mesa” adding that she received “no notice, yet my property is almost contingent to this site.”

Another speaker said there are lots of children in the neighborhood and that traffic is already a “nightmare” at rush hour at Fuerte and Grossmont Blvd., the nearest intersection that parolees who drive to the facility would travel through.

The next resident noted that “people walk their dogs at night. This is a forested area. There are trees and dark spots.” He said having a parole office there would be “scary” adding, “The neighborhood doesn’t deserve it. “ Parolees with vehicles would drive through residential areas, he added. 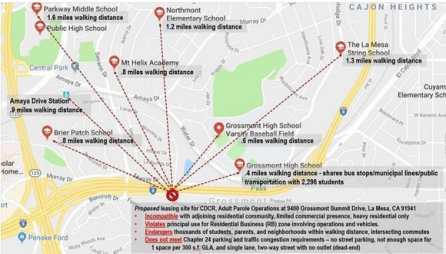 Mayor Arapostathis said he will make sure that the state agency is notified about the objections raised and that he has read every message he’s received.  “I will make sure to get word out” about a townhall when one is scheduled, he added. “We’re trying to find out what our oversight is…we’ve been doing that for the past four days.”  He assured all present, “It doesn’t matter if you’re in La Mesa, unincorporated La Mesa or even El Cajon.”

The city advises residents concerned about the proposed parole facility to submit comments for the public record to :

Residents opposed to the project have launched a petition online at : https://www.change.org/p/stop-adult-parole-operations-from-opening-in-mt-helix-la-mesa?fbclid=IwAR2yU7mFIYasnGbNDD9gzlGxJxYTUP6A1Gkm9icKVfn-I-tw2ErTiHdreuM

A Stop Parole Office on Mt. Helix Facebook group has also been set up at https://www.facebook.com/groups/stopparoleoffice/?inviter_id=143900243&is_new_user=0

Additional contacts listed on the opposition group’s Facebook page include:

Want more coverage on issues that matter in your community?  Support our independent nonprofit news with a tax deductible donation. We reflect your interests, not special interests!  Please donate to help us provide continuing cover of issues that matter such as this one. You can donate online at www.eastcountymedia.org/donate or  mail a check to East County Media, 4438 Hideawa Place, La Mesa, CA 91941.