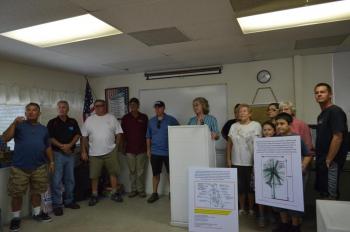 Donna Tisdale chairs the planning group in Boulevard, where several new wind projects are proposed. Her planning group has opposed them, but San Diego Supervisors on Wednesday approved a wind ordinance that would allow such projects in East County.

Tisdale told assembled media, “Overnight one of the Siemens 1.3 Units threw a blade and crashed on a public access trail.”  She emphasized that this was one of the things that residents of both Ocotillo in western Imperial County and Boulevard in eastern San Diego County warned about.

She also announced that this week,  the Judge has ruled that a lawsuit on behalf of residents suing over the Ocotillo wind project will be heard in state court, not federal.

Tisdale also said that she, along with two nonprofits, are planning to sue the County of San Diego as well, now that the County is allowing for the development of these Industrial wind farms on private lands.

“Boulevard is already impacted.” She emphasized that both San Diego and Imperial Counties supervisors have failed in their due diligence. They decided to put these industrial energy facilities in the backcountry, and away from cities, and they are producing energy that is three times as expensive as before. We have already seen a 12% rate increase sought and she expects it to be higher, Tisdale said.

According to Tisdale, due to all the credits that SDG&E gets, they are paying zero taxes, while impacting communities with both electrical and noise pollution. She wants the turbines removed.

Jim Pelley said that the project development today claimed that these blades should be able to withstand 100 mph winds.  The highest gust was 29 mph, he told ECM.

Pelley told ECM, “these blades are 108 meters (three hundred and eight feet).” The wind in the valley “is very turbulent, and can change directions very fast.” 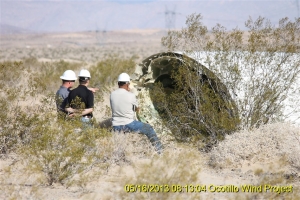 Pelley, an aerospace engineer, said he believes this leads to issues with the harmonics in the blades as well as vibrations. Both are known to be behind famous engineering failures. The most famous of these failures is the Tacoma Gallows bridge in the State of Washington. You can watch the youtube video here:

Pelley  believes that these added stresses are what led to this failure. He also thinks that the Siemens employees, who have been on site since the Ocotillo Express Wind Farm went online six months ago, have been trying to adjust things to avoid precisely this problem. Pelley was blunt. “These blades were not made for this area.”

He also said that he has seen a lot of questionable work, starting with how fast the project was fast tracked. He has also witnessed Siemens personnel replacing bolts. These activities follow a similar blade failure recently in Iowa.

Early in the morning when the blade in Ocotillo came down, fortunately it not fall into property, as has happened in other places, Pelley went there. He was told by a Pattern project manager that “at this point I do not want to provide any information until we do a full investigation.”

ECM called Pattern’s media relations officer Matt Dallas. He did not return a call. Siemens issued a statement indicating it has suspended operations worldwide of the failed turbine model pending investigation to determine that they are safe to operate. 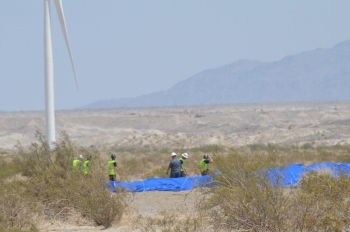 Pelley also said that the claim that Ocotillo Express will power 125,000 homes is “a scientific impossibility.” Meanwhile the project as sacrificed a multi-use backcountry area the size of Mission Valley in San Diego, he observed. He also noted that there are many times that those 112 wind turbines sit idly when there is no wind.

He also raised concerns over stability of the turbines built in a federally designated flood plain. The hydrology has been changed due to grading by Pattern; the July 13, 2012  flood after a rain that lasted two hours, was the worst he’s seen.

“Four of the foundations were flooded with water. Pattern (Energy) left them, with stagnant water on top of the aquifer.”

Pelley also stated that Pattern dug too shallow trenches for electrical lines, posing potential electrocution risk. He closed by saying that “It is a matter of time before something happened.”

Mark Ostrander, who is a retired Cal Fire Chief, told the media that there was also a fire danger with turbines. Once a fire starts, the question “is how to stop it.” 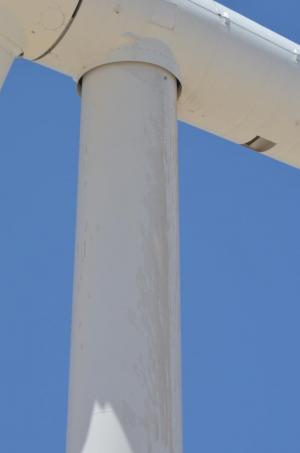 He said that stray voltage can cause overheating over the ball bearings at the top of the assembly. These units have anywhere from 200 to 1,000 gallons of fuel, and if any of it gets into a hot ball bearing, you have a fire.

The reason why wildfires are rare in the desert is that “there is low infrastructure and a low population density.”  But in East County, the risk is far greater.

There are areas of the back country that can only be reached by crews on board helicopters. Also, if the fire crews have to fight these fires, they face an energized field and standard tactics do not work. They will “have to alter tactics.”

The current philosophy is to try to keep fires small, but if they can’t fight them, they will grow and in the middle of a Santa Anna this will have disastrous effects, Ostrander predicted.

He also went over the problem of long-range transmission lines and how having the current model leaves us vulnerable. The first problem is that  due to friction, energy is actually lost in transmission lines, mostly due to heated power lines. That is why renewables are far more efficient the closer they are to the sources of need.

The second problem is that remote transmssion leaves us vulnerable to a terrorist attack or human error, like the blackout of 2011. The source was tracked to a single point of failure and a single human error.

A distributive network would be much harder to fail, since the source of power generation is in some cases your roof.

Mark Meech, a long time resident of Ocotillo, told ECM that he has owned property since the mid 1960s.

It has affected him visually, as everywhere you look, there are turbines. More importantly, his property value has crashed. His neighbors tried to sell their properties and they finally removed them from the market.

These residents have Jeeps and Quads, and liked to go out at night to see what wildlife they could find. Many of the public access roads are now gated, which the Bureau of Land Management promised itwould not do. There are now “limits on how much land you can use,” said Meech, adding that he is “not sure if I want my kids out there.”

His question to the Imperial Board of Supervisors is how will they protect the people? Will they close up the land or “ask these things to pack up and leave?” They are responsible for the health and safety of the residents, he insisted.

The Turbines are impacting the enjoyment people used to have from their properties—the reason they live in Ocotillo part time. It has also divided the community.  Those who supported turbines include owners of the local restaurant, who got some business from the construction crews. Those construction crews are now gone, and while permanent jobs were promised they have not materialized.

Meech is planting plants and trees to try and shield the view of the turbines. This is within the Cal Fire recommended defensible space, and he is also going to need to use more water. In his view, due to the damage, Ocotillo will be “a gigantic sand dune in twenty years.”

He also said that Glenn Hodges of Pattern said that the company has had no report of seals failing and letting the oil out, which could contaminate the aquifer.

Yet residents have seen two failures already, and oily fluid can be seen dripping down at least one turbine.

ECM also talked with Bill Pate. He is one of the lawyers who has filed lawsuits. While they were dismissed, he intends to go back to court, once “we can prove a violation of the False Claims Act. “

He smiled, “I can promise you, we will not go in there half cocked.”

His case was dismissed on a technicality, and transferred to another judge. He added, “these lawsuits are very expensive and complicated.”

While there is a windy season in the desert, he said that “the winds in this area are below the national standards for wind development.” Part of it is because Ocotillo lies on a low basin, with mountains on three sides.

This, according to the experts he has consulted, is not suitable “for turning the one hundred and fifty tons blades, where a blade assembly is over 150 tons.”

Ovenight, a blade became a low flying object less than a mile from a paved road. In fact, where the blade fell, is a road “that goes north, and we have used it for 20 years.”

This is the equivalent of a 747 wing falling.  The blade scattered shards of balsa wood and fiberglass across the desert floor.

He added, “My kids are out there all the time,” but after the accident, “My wife was terrified.”

His 9-year-old wants to know, “Why did they put these things here?”

“They have turned a recreation area, into an industrial zone,” Pate concluded.

I think you're being far too kind to the Supervisors, Hiker Gal.

The supervisors on the Board of Supervisors in both San Diego and Imperial Counties who voted for wind farms were BLINDED by the wind energy companies' razzle dazzle and $$$.  They have NO excuse.   They were presented with info and photos showing other failures, including the Campo Kumeyaay wind farm .   Sooner or later, wind farms have failures.   Thank God nobody was killed!!!   They need to take another "look" at what the residents have been saying all along!

As for me, public lands with wind turbines are off-limits because of the danger from failures like this.