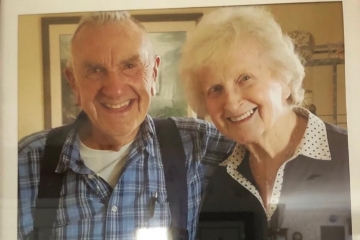 November 7, 2019 (Julian) – Julian resident Jim Baker served as a firefighter for 41 years as well as Fire Chief in Del Mar.  But now he faces financial struggles after his wife, Janet, was diagnosed with Lewy Body Dementia. According to family friend Beatriz Cauzza, who has started a GoFundMe page to help the couple, “Within the first 26 days of that diagnosis Mr. Baker spent $143,000 on medical bills that were not covered by their insurance.”

Baker cared for his wife at home until it become “too difficult and dangerous, then moved her into his daughter’s home to care for Mrs. Baker as a team.” But ultimately, her medical needs exceeded the abilities of even two caregivers. “Mr. Baker had to make the extremely hard decision to put Mrs. Baker in a memory care facility in Escondido. He chose the absolute best he could for his precious wife,” Cauzza says. “But unfortunately their insurance does not cover the home and he has been paying for all medical bills since then out of their savings. He is now to a point where he is running out of funds.”

The Bakers were her neighbors from age 5, acting as “grandparents and mentors,” with Chief Baker even officiating at Cauzza’s wedding. “I can’t think of a kinder, more generous loving couple,” she says, adding that Jim Baker also served in the Marines during the Korean War.

“Everyone who knows him can tell you a story of how he has helped or inspired them in one way or another. In return I would love to help raise this money for all his future medical bills towards his wife’s care in this very difficult time. And of course for any other expenses he may need for himself as well,” she concludes, adding that while Mrs. Baker’s memory is fading and health declining, “Mr. Baker is focused on giving her the best care he can, because his love for his wife is priceless."
She asks for prayers as well as donations, which can be made by clicking here.