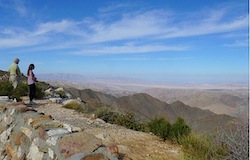 June 18, 2013 (San Diego’s East County) – I disagree with one of the statements County Supervisor Dave Roberts made in his recent editorial. I do not think the County Board of Supervisors is as powerless, in regard to the final decision about wind farms going onto the Federal and tribal lands in East County, as he seems to think. I suspect that, if they were willing, the Board could bring a lot of assistance to the East County residents fighting to preserve their quality of life.

The three key questions in this debate are:

1.  Is there a problem? (Supervisor Roberts has acknowledged that “Sadly, Boulevard residents are going to be surrounded by large wind turbines on federal, Imperial County, and tribal lands.” However Supervisor Dianne Jacob indicated the problem is not restricted to Boulevard. She says she has been hearing from “all across my district, in many communities” and added that Sunrise Powerlink “destroyed miles and miles of once-pristine landscape and has increased the risk of wildfire in an already fire-prone area.” Mayor Filner also referred to a larger problem when San Diego Loves Green interviewed him last February. He said it is more feasible to put solar panels on some of the city’s rooftops and parking lots rather than “building these environmentally destructive transmission lines through our East County.” (watch video 4:20-5:59)

2.  Is the Board of Supervisors responsible for the welfare of East County? (I believe Supervisor Roberts acknowledged this.)

3.  Is there anything the Board can do about it?

That last question is crucial. Supervisor Roberts wrote that “The County Board of Supervisors has no control over the approval of those turbines.” I disagree. The County Board of Supervisors may not have direct control over the approval of the wind turbines going into East County, but what about projects that impact public roads and water supplies? What about voicing their concerns to Federal Officials?

Supervisor Jacobs has already added to the legitimacy of the protests from her district. She said, “This isn’t a case of a vocal minority making noise.” The concerns are widespread and “Many of my constituents worry that the line is just a sign of things to come as developers step up their efforts to build large energy projects in the backcountry.” Yet Supervisor Roberts stands alone, in opposition to rest of the Board, whenever she attempts to defend her district. This last 4:1 vote is just the most recent example.

Supervisor Jacob’s opposition to Sunrise Powerlink is a matter of public record.

When she refused to attend the opening ceremony, Jacob issued a statement saying, “Any policymaker attending this ‘celebration’ needs to justify the line in the face of documented evidence warning of its extreme fire dangers. SDG&E brushes off concerns about fire safety by claiming that the utility has a fire plan. This doesn’t change the fact that the project’s environmental documents concluded that fire dangers posed by the line are classified as the highest level possible and cannot be mitigated. The line traverses some of the most fire-prone terrain in the world. It will impede firefighting efforts from the air because firefighters cannot make water drops on energized lines. Public safety was a big reason why two CPUC judges recommended the line be rejected in 2008. Anyone who supports this line is likely contributing to the next major fire disaster in East County and beyond.”

She was not the only one to stay away from that ceremony. San Diego’s five Congressional members and the leaders of 19 Native American tribes were noticeably absent.

If Supervisor Dave Roberts were to join Jacob now, it would reinforce the recognition that there is a problem in East County. It may even be the tipping point that would lead to the Board of Supervisors aligning themselves with the interests of the people of of East County. Maybe San Diego could move beyond debating whether there is a problem and find ways to resolve it.