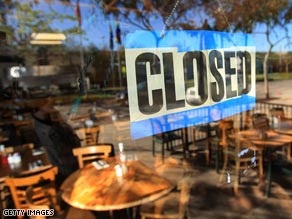 October 29, 2020 (San Diego) – Restaurant owners in San Diego and several other counties filed claims Tuesday October 27, asking for refunds of state and local fees assessed during the COVID-19 pandemic. Plaintiffs seek refunds of costs incurred for liquor licenses, health permits and tourism fees at a time when public health orders shut down many businesses or forced them to operate at reduced capacity, while incurring added expenses.

The state has 45 days to respond to the claims, after which a lawsuit could be filed. 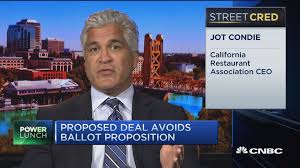 California Restaurant Association president and CEO Jot Condie (photo, right: CNBC archives), said, “Even when the restrictions are lifted, the devastating impact on the restaurant industry will extend for years. Restaurants have not received any form of relief. Easing fees would help enable establishments to stay open and keep vulnerable workers employed.”

Results of a survey published August 28 by the California Restaurant Association revealed that 60% of restaurants that responded indicated they received no federal aid through the Paycheck Protection program and would run out of funds at month’s end. Nearly two-thirds (63%) have not received and rent relief and 30% said they will close their restaurant permanently or downsize by closing some locations. Only 41% said they could remain viable even with 50% indoor capacity.

Before the pandemic, 1.4 million Californians worked in restaurants. Since March, between 900,000 to 1 million of these workers have either been laid off or furloughed – and many continue to wait on an unemployment payment that never comes.

“Our members are like most Californians, now wondering not just how to sustain a job or a business, but how to make the mortgage payment on their homes,” Condie said in August. “This could have been prevented with a few simple policy changes that would give restaurants rent relief and allow them to work with their insurers to cover some of their massive revenue losses.” He blamed legislative inaction, adding, “Californians will soon look around our communities and see too many dark, empty store fronts, and it could have been prevented.”