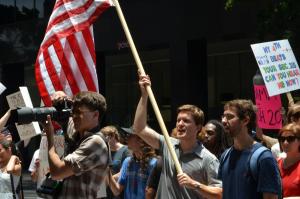 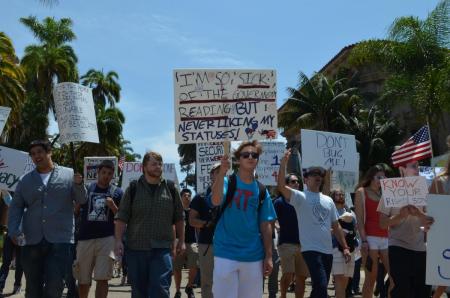 Kevin Maule, one of the organizers, told the crowd that “237 years ago the founding fathers were signing the Declaration of Independence.” They opposed a king that ignored the will of the citizens. Nor did they hide while the British violated their rights, he noted.  In fact, they knew “that all men are created equal.” They also observed that “history is created by those who show up.”

He closed by emphasizing that the reaction right now from the Government is “so sue us.” Challenge accepted, as the people are trying to do just that.

Whistleblower Edward Snowden revealed the massive secret program of gathering metadata on millions of Americans first in a story published by the Guardian newspaper in London;  the Washington Post later confirmed the story. Snowden’s revelations created  an international incident after Bolivian President Evo Morales’s plane was forced down in Vienna, Austria last week. Bolivia has offered to grant asylum to Snowden.

An earlier Restore the Fourth action was also held July 3 at night on the Clairemont bridge over Interstate 5,  where 20 or so activists with San Diego Overpass light brigade 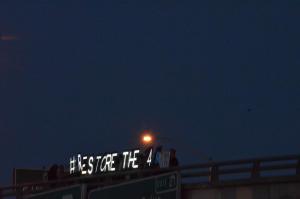 The mood at the park was a mixture of anger at the actions of the Federal Government, and a celebration of the Fourth. The rally proper started with a wonderful rendition of the National Anthem by Joules Landis.

Ray Lutz of El Cajon, master of ceremonies for the event, quoted Edward Snowden, the man who leaked the material to the Guardian, who said, “I don’t want to live in a world where everything I say is recorded.”

Lutz, an engineer, said it is very much technically possible to keep and record all information in our calls. (The President denied that this is happening and has said that only metadata is being kept, but as more information emerges the prospect for misuse of information stored remains, many here fear.

Frank Gormlie, editor of the San Diego Free Press, and a criminal lawyer, explained just how much damage has been done to the Fourth Amendment. “Today I am not proud to be an American,”  he stated.

He explained that since the passage of the United States Patriot Act, nothing is private. Then he said that the Fourth Amendment is very “sick”  and that even suppression of evidence hearings rarely go well for defense lawyers, due to the myriad of exceptions now to the Fourth Amendment.

Among them, he cited exigent circumstances, when police enter a property in hot pursuit. Parolees who are considered to have no Fourth Amendment Rights. Another is the border exception. At an international border, people are in a kind of a legal limbo and doing a search is legal and easy. He also reminded the audience that if they are arrested, their cell phone can be dumped by the authorities.

He closed by telling the audience, “The health of the Fourh is pretty weak. We need to restore it.”

Aya Dubman, an immigrant from Russia, where spying by secret police has long been viewed as a sign of a totalitarian state, started with a joke, “The NSA is looking for any excuse to deport us now.” 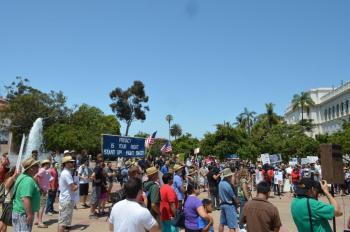 She got involved with the movement on Reddit. She then thanked all who were present, “for being here.”  She also reminded people that it was not just about the Fourth Amendment but the First Amendment rights to free speech and freedoms of the press as well.

According to Dubman one hundred cities in the US were taking part in the event worldwide, as well as a flash mob in Munich and a crowd in London. This is about “the voice of the average citizen.”

Lutz closed by reminding people about the trial this week of Jeff Olson, the protester charged with a felony and facing 13 years in prison for using water-soluble chalk to write protest messages outside Bank of America.  The judge in the case tried hard to keep speech out of the courtroom.  Olson was facing a year for each offense he was charged with, but the jury found Olson not guilty.

Lutz maintained that City Attorney Jan Goldsmith embarrassed himself before not just San Diego, but the nation by prosecuting Olson for activity that Lutz views as protected free speech –and apparently the jury agreed.

Dave Patterson of Veterans for Peace, a Ramona resident, spoke candidly. Forty years ago he was in Cambodia, reading about anti-war demonstrations in the US. He was fighting for their rights, he told himself back then. He was proud. Ironically, the fight is now here, he observed, as people fight to keep our rights.

“To hell with the NSA!” he told the crowd, to cheers.

He also explained that a scaled-down drone now used by the Border Patrol and other agencies in the U.S. is a Predator drone. These, as revealed in a New York Times story this week, are being flown in the United States. Last year these Predators flew 250 sorties for other agencies. There is this synergy between local, state and federal agencies that is dangerous, opponents contend.

The protesters called on Congress to be accountable and transparent, bringing these facts out in the open.

Hugh Moore, Treasurer Secretary of the Green Party in San Diego, told the crowd that the “Fourth Amendment is a protection from our own government.”

“The government,” he added, “has no right to privacy.”  He then told the crowd that the 1917 Espionage Act has been used three times by presidents before President Barack Obama’s administration. So far  President Obama has used it seven times. 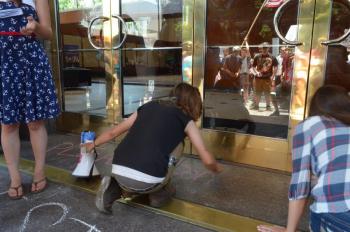 Moore asserted that what they are afraid of, the government that is, “the public,” who “have the power.”

Once the rally was over, the crowd thinned for the march. It was two miles down to Sixth Avenue, and another two up hill back to the park. They attempted to deliver a letter of demands to U. S. Senator Dianne Feinstein (CA-D).

Once the crowd reached Symphony Hall, where Senator Feinstein’s office is located, the guards closed the doors. They refused to have any interaction with the protesters, and the protesters proceeded to read their lists of demands, chalk the entrance to symphony hall, and tape the demands to the door.

It is unclear if the response would have been different had the protesters visited Senator Feinstein’s office on a business day instead of a holiday, when staffers were not present. 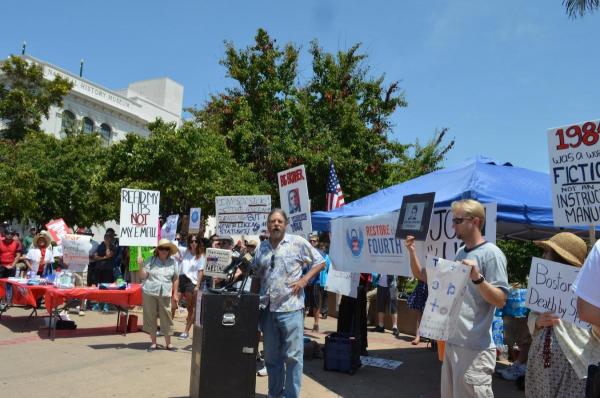 Snowden is a hero and a patriot in my book.  We live in an age where the civil liberties our forefathers fought so hard for are being eroded by the day.  Freedom of Press, Freedom of Speech and Freedom of Assembly are mere ghostly images of their original intent.  We’ve woken up to an Orwellian Society of Fear where anyone is at the mercy of being labeled a terrorist for standing up for rights we took for granted just over a decade ago.  Read about how we’re waging war against ourselves at http://dregstudiosart.blogspot.com/2011/09/living-in-society-of-fear-ten...