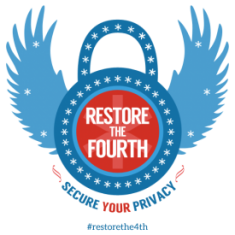 “The right of the people to be secure in their persons, houses, papers, and effects, against unreasonable searches and seizures...”  U.S. Bill of Rights, Amendment IV

June 28, 2013 (San Diego)—A new nonpartisan movement called “Restore the Fourth” has been formed to seek restoration of Constitutional rights to privacy under the Fourth Amendment.  The effort is prompted by revelations that the federal government has secretly accessed phone and Internet records for millions of American citizens.

On July 4, Restore the Fourth is organizing protests in cities across America.  Restore the Fourth invites the public to join a rally and march to Senator Dianne Feinstein’s office.  Marchers will meet at 11 a.m. at the Balboa Park fountain near the Reuben H. Space Theater.

“People all across the country are getting mobilized to tell the government on July 4th that we will not tolerate covert surveillance against Americans behind our backs and without our consent,’ a press release from the organization states.  “We need numbers and spirited people who will defend our constitutional rights.”

For more information and to find rallies nationwide visit http://www.restorethefourth.net/.