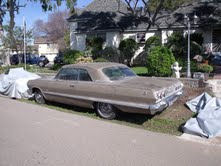 May 3, 2011 (El Cajon) – Drum Macomber of El Cajon is revved up over winning the “Best in Show Sycuan Casino Award” at last Wednesday’s Classic Cruise Night in El Cajon.

“I have owned the car for about seven years,” Macomber said of the 1963 Impala Super Sport that he purchased from the original owners with 132,000 miles.

Macomber a former El Cajon citizen of the year, survived a harrowing motorcycle accident that sidelined his 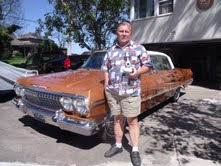 efforts to restore the classic car temporarily.  But over the past year, he’s been working on  the restoration.  “Gene Townsend Auto Body and Paint performed the preparation and the AWESOME paint job,” he wrote in an e-mail to East County Magazine.

The very first car show that he entered his restored Impala into was the Cajon Classic Cruise on April 27, 2011 – where he won the Best of Show trophy along with a “goody bag” from Sycuan.

Would love to restore are car like this one day. I'm sure it would cost a bit though.