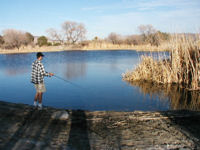 By Howard Cook
February 3, 2012 (Jacumba)--Jacumba is located in San Diego County on Old Highway 80 next to the Mexican border, Imperial County and south of Interstate 8. Native American Kumeyaay called it Ahkum, which translates to bubbling water. Indeed, Jacumba is blessed with a bubbling spring and wells producing both hot (101 degree) and cold waters. The spring was always important for plant, bird and other animal wildlife. The Kumeyaay also utilized the spring for its water and heat. They would dam the spring outflow and create ponds. Later in the 1800s, early settlers were attracted for the same reasons.
Chris Wray, in his latest book “The Historic Back Country”, has a 1910 photo showing people fishing in the pond adjacent to the spring. Henry Lazare in 1954 acquired the town, hotel, spring and pond. He sank a new well adjacent to the spring which produced larger quantities of hot water. He enlarged the pond to a 7-acre lake filled from the well overflow. Wildlife, bird and fish habitat were improved and expanded. It became a shaded oasis offering fishing, birding, swimming and recreation.
But in 2004, the recent former owners chose to divert water flow from the lake. The lakebed currently contains only a very shallow remnant. Late last year, after learning about a probable change of ownership, a town support group called the Revitalization Alliance set about to rehabilitate and fill the lake, surrounding trails and park. The effort has now accelerated, as the ownership change is almost complete.
In addition, the National, State and San Diego Audubon Society, State Fish and Game and The US Wildlife Service have heard about and are now promoting lake rehabilitation. These entities are promoting lake rehabilitation because it is important habitat for the endangered Tricolored Blackbird, which is a designated  ”Species of Special Concern” as well as other wildlife.
They have submitted a proposal to the new owner of the Jacumba Hot Springs Spa and to the Revitalization Group. Audubon plans to seek funding for much, but not all of the lake rehabilitation. This effort is currently in the planning phase, looking forward to implementation in 2012.
People in Jacumba, as well as surrounding towns and area, are all eagerly looking forward to a revived and enhanced Lake Jacumba.

Howard Cook is a member of the Jacumba Sponsor Group and a resident of Jacumba.