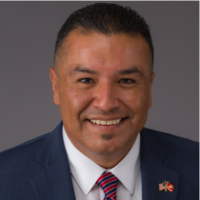 July 13, 2017  (Lemon Grove) – A judge has denied  a permanent restraining order sought against Lemon Grove Councilman David Arambula by a local lawyer for whom he once worked as a paralegal. The restraining order request was denied with prejudice, meaning that it cannot be refilled.  The judge found no evidentiary basis for a civil harassment order.  View the judge’s Minute Order.

Attorney Dorinna Hirsch’s request for the restraining order claimed that after she instructed Arambula to improve his work, he tampered with legal documents, threatened to ruin her business and stole $8,500, 10 News  reported.  In her petition, Hirsch claimed she felt "terrified" by what she describes as threats to intimidate her out of filing criminal charges.

In an email to ECM after the hearing, Arambula wrote, “It is my unequivocal belief, which is further supported by evidence at last week’s formal Hearing, that Petitioner’s true motive for seeking the Civil Harassment Order was to smear my name and reputation, preemptively attack my credibility and a frivolous attempt to ultimately dissuade me from pursuing a civil action against the Petitioner for substantial monies owed to me and of which I had already placed her on notice about immediately prior to the Petitioner filing a Request for Civil Harassment Order.”

He added that he intends to pursue claims against the Petitioner and possibly the Petitioner’s attorney for “defamation and malicious prosecution.”

The truth will come out soon! His political colleagues are starting to see the drinking problem. Too bad the city of Lemon Grove only has 2 real council members. Jerry Jones and Matt Mendoza.