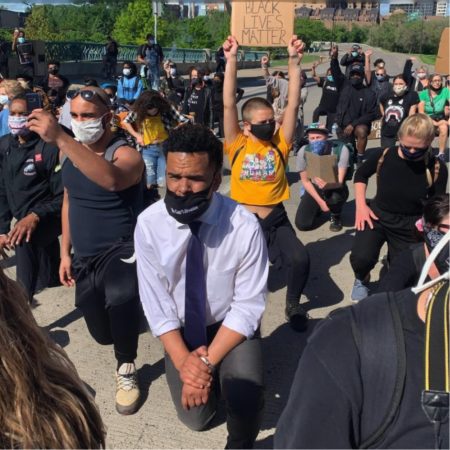 “The arrest of George Floyd should not have been a death sentence. What you saw when you looked at the video of the killing was a policeman who was the judge, the jury, and the executioner.” – Rev. Shane Harris, People’s Alliance for Justice, in an exclusive interview with ECM

May 30, 2020 (San Diego) -- The brutal killing of George Floyd, an African-American man, by a white police officer in Minneapolis has sparked protests and civil unrest nationwide. The Washington Post has compiled video from multiple sources, documenting that after a store clerk alleged Floyd used counterfeit payment at a store, Officer Derek Chauvin handcuffed Floyd and later knelt on his neck for nearly nine minutes, ignoring gasps of “I can’t breathe!” Three other officers failed to intervene.

Four nights of protests  in Minnesota ensued, including rioting and burning a police station.  Minnesota’s Governor has called in the National Guard, declaring that most protesters are outside agitators. Officer Chauvin has been charged with third degree murder and manslaughter; all four officers were fired. But many believe more must be done for justice to be served.

Reverend Shane Harris, a national civil rights leader and founder of the People’s Alliance for Justice (PAJ) based in San Diego, flew to Minneapolis on Friday and provided an exclusive phone interview to ECM on Friday night.

After arrival, Harris paid his respects and laid a wreath at the site where Floyd was slain, met with local activists, and joined a march across the Hennepin Bridge to call for justice. Most participants wore masks due to the coronavirus, but some lacked this protection – another injustice Harris hopes to remedy.

“There were over 500 people there. It was like being in Selma, Alabama,” he told ECM.  “These people are fearlessly fighting…They had to fight for the attention through a pandemic, because COVID-19 was ruling the airways but they really have turned the whole country into a conversation that didn’t even seem possible a month ago. They’ve changed the whole media conversation. I have seen more white people speaking up than I have ever seen, more commitment not to accept this.”

Harris will be meeting this weekend with Floyd’s family to present a check to help them with funeral expenses and more.  Two  San Diego businessmen, Mark Arabo and Sam Nejabat, made large contributions to match PAJ’s contribution, he said.

On Monday, Harris plans to deliver a letter to the Hennepin County District Attorney calling for the arrest of the other three police officers. He also indicated many activists believe charges against Chauvin should include first degree murder. If the D.A. won’t take action to hold all officers accountable, Harris wants an independent investigation by the state’s Attorney General.

“The arrest of George Floyd should not have been a death sentence. What you saw when you looked at the video of the killing was a policeman who was the judge, the jury, and the executioner. That is unjustified, when a man is killed before he can get his day in court—and it wasn’t a violent crime, it was an alleged forged check,” said Harris.

President Donald Trump was silent initially after the killing of Floyd, but took to Twitter to denounce protesters as “thugs” and announce he had authorized the military to regain control in Minnesota, adding, “when the looting starts, the shooting starts.”

Trump’s remarks drew swift rebukes from civil rights leaders and from former Vice President Joe Biden, Trump’s rival in the November presidential election.   Biden told CNN he found Trump’s comments “thoroughly irresponsible,” adding, “He is totally, thoroughly wrong the way he’s handling it. It is not presidential…It’s not consistent with our values.”

Harris said that on the ground in Minnesota, he’s been talking with “the very people who are being trashed by the president…These people are outraged by what has happened, the constant pandemic that has plagued black America. Every time you look up, it’s another black man or woman being killed, there is no accountability.”  He said the president’s comments “struck a nerve; it took me back to the ‘60s when people were brutalized by police.”

Harris noted the contrast between the Trump and Obama administrations. President Barack Obama organized a task force on policing under Attorney Eric Holden in the Justice Department. “”President Trump has basically defunded civil rights [enforcement] in his administration and that’s put us all at risk,” Harris says.

By contrast he found Biden “fair and balanced in his approach” but wants to see a detailed policy from the Biden campaign. He notes that Biden’s recent comment suggested anyone who doesn’t vote for him isn’t black was “aggregious.” Harris, who has met with Biden previously, added that he hopes to set up a Zoom conference call with the Democratic presidential nominee. He wants to see a policy from the Biden campaign on “how do you transform policing in the 21st century? That is what I believe will build trust in the African-American community.”

Rev. Harris does not condone rioting or looting, but hopes the focus will stay on the police officer now accused of murdering George Floyd and the other officers he hopes will be charged.

“I think that there is always a better way to express your anger and your outrage, but I also want to say that I understand that they are at the tipping point,” he says, adding that people in Minneapolis are also facing food shortages and other problems due to the COVID-19 pandemic.  “Most of these people feel we were very kind in the civil rights movement, and we didn’t get anything,” he reflects, noting that some believe the only way to bring about change is to make others feel the pain that they are feeling.

Minnesota has a history of racial tensions that have left simmering undercurrents of anger even before the Floyd killing. In 2016, a Latino officer who shot and killed Philando Castile, who was black, during a traffic stop was charged with manslaughter but later acquitted. Convictions against a police officer are rare. In May 2019, the Washington Post reported that nationwide, only four police officers have been found guilty of murder. One of those was Mohamed Noor, a black officer in Minnesota who killed a white woman while off duty.

As a national civil rights leader, Harris hopes to be a facilitator of change, channeling anger into community organizing and legislative reforms.  “I’m listening to them,” he says of activists he’s met, “ and figuring out how we can pull in national resources, national celebrities.”

Congressman Ro Khanna has introduced a similar federal reform bill, but it has little chance of passage given the current makeup of Congress. “Mitch McConnell is a do-nothing Senate leader and those folks hold up progress for America,” Harris observed.

For now, he is focused on organizing in Minnesota, including starting up People’s Alliance for Justice affiliates there, as several other states already have in place.  He hopes to “move people out of that anger and into organizing strategy. We will be part of that healing and infrastructure,” he concludes.

When he returns to San Diego, Rev. Harris says his organization is working to organize a Tuesday evening march at 5:30 p.m. to honor George Floyd. The march is planned to begin at City College and proceed down Broadway to the federal building, where a rally will be held. “Wear your mask and social distance,” he advises all who wish to participate, “but don’t let that stop you from speaking out.”