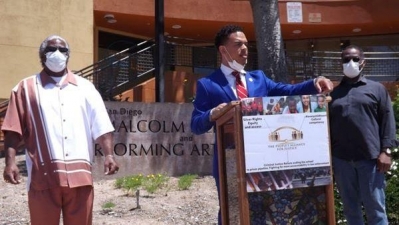 May 23, 2020 (San Diego) – Civil rights leader Rev. Shane Harris with the People’s Alliance for Justice held a press conference to protest library budget cuts at the Malcolm X Library in San Diego on May 20th, birthday of the slain human rights leader for whom the library is named.

Mayor Kevin Faulconer has proposed $6.8 million in budget cuts to San Diego city libraries due to costs of the COVID-19 pandemic.  The city estimates a $300 million economic toll on city finances in fiscal years 2020 and 2021 from the pandemic, due largely to lost hotel and sales tax revenues.

But Rev. Harris states, “These libraries are essential places for our children and inner city community members.”

The People’s Alliance for Justice launched a “Book the Budget” campaign “to ensure that our city’s libraries are protected in the aftermath of the COVID-19, especially the Malcolm X Library,” Harris later posted on Facebook.

He further pledged to preserve the legacy of Malcolm X “by any means necessary.” 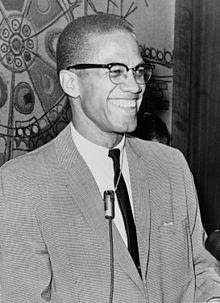 Wednesday would have the 95th birthday of Malcolm X, the African-American leader assassinated in 1965.

The efforts by Harris to save library funding drew praise on social media, though Leslie Kehl raised concerns over other priorities, particularly education.

“Libraries are important, but what about schools?” Kehl wrote, adding, “The schools in San Diego do not have the money to reopen. Students in low income neighborhoods, primarily those of color, are falling more and more behind. They will be negatively affected by budget cuts even more so than those from wealthier neighborhoods.” While she agrees that protecting library funding is important, she continued, “There are even more fundamental issues being exacerbated right now because of budget cuts.”