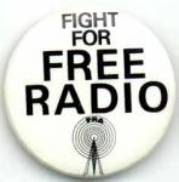 April 21, 2012 (San Diego’s East County) –“Every once in a while, government does something that is not only good news, but refreshing,” local author and former public radio producer Walter Carlin said of last month’s decision by the Federal Communications Commission (FCC) to open the airwaves up for community radio stations, rather than reserving that space for mega-networks with concentrated ownership and opinion-shaping power.
The decision, however, presents a new challenge, Carlin notes. “Can and will local radio respond?”
The FCC rule changes aims to open up the airwaves for potentially hundreds of new low-power community radio stations across America.  To make room for new stations on crowded airways, the FCC will halt processing applications for 6,000 FM translators, which are repeater stations that rebroadcast programs from distant areas. Some mega-broadcasters  have used the translators to block local programming.  For instance, Horizon Christian is a religious network that owns 435 radio licenses including many translators broadcasting on a spectrum reserved for educational broadcasting.
Such monopolization of the airways was made possible by deregulation, in which a rule limiting one media outlet to owning five radio stations was eliminated. That gave rise to powerful conglomerates such as Clear Channel, which at its peak owned over 1,000 stations including a half dozen or more in San Diego.
“Pirate radio” stations sprang up illegally, reaching small geographical areas until the FCC shut down such operators.
Now, however, aspiring broadcasters hoping to serve their communities will soon be able to apply for legitimate low-power FM licenses. 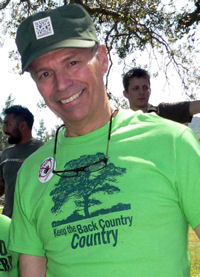 “Typically they only reach a radius of a couple of miles,” said Martin Eder, whose San Diego Community Radio Project recently had an application approved to launch a full-power FM radio station that will transmit from East County. KNSJ89.1 FM should be broadcasting from a tower above Descanso by the end of 2012, but streaming radio from KNSJ.org will be online in the near future.
In East County, Eder is best known for efforts to help defeat Blackwater’s plans to open a private military camp .  Eder’s station has a potential initial audience of several hundred thousand(still low by full-power FM standards, less than KPBS and far below strong signal stations such as KOGO).
Even a low-power station capable of more limited reach, however, can have value for local listeners. “They are local and community oriented. They may be for a language minority and serve a specific community,” Eder observed. “They definitely tend to give voice to the voiceless, to those people who have no access.”
Eder estimates that San Diego may have only two or three low-power licenses available, fewer than some other urban areas due to the proximity to the border and signals reserved for Mexico.
Although Eder supports the FCC move to block translator applications, the step actually hinders his stations’ effort to obtain a translator to boost its signal. But Eder says there are other options.  “We may be able to relocate our antennae closer,” he said, adding that with emerging newmedia models, more people may also be able to listen online or through other means, such as cell phones or satellite radios in their cars.  “So we are going to start small, and hope to increase both our signal and quality and certainly do radio streaming.”
To get on the air, Activist San Diego must raise at least $50,000. “We are committed to get on the air by the end of 2012,” said Eder, adding that about 25% of that goal has been reached thus far.

The organization aims for an inclusive programming model of community-based broadcasting that “allows for a very high level of civic mindedness and civic involvement,” Eder said.  “We want to be able to highlight local culture, local musicians, and local issues but also tie in to national programming that has to do with citizen participation in social, cultural, economic and political involvement,” he said of the venture, which will be nonprofit.  “Also very much in our plan is to take existing local journalism like East County Magazine, Voice of San Diego, and Zengers Magazine and give an audio version of this.”

The San Diego Community Radio Project is looking for locals to produce shows and provide content, particularly local and civic affairs. Meetings are held the first and tird Thursdays each month at 4246 Wightman Street, San Diego 92105.  All volunteers or supporters or independent media are invited.

Are you looking for naming rights? San Diego Community Radio Project is conducting a targeted fundraiser for a custom transmitting antenna that costs $19,000--an essential piece of equipment to get on the air. Radio donors will be permanently recognized as founding members. To help, call 619-871-9354 or donate online at https://npol.networkforgood.org/Donate/Doonate.aspx?npoSubscriptionId=2821 .  To learn more, visit www.knsj.org

So glad this "impossible dream" can be made a reality.

Media Justice Activists -You are invited to the

How can we Occupy the Radio waves?

Find out what's going on a www.ActivistSanDiego.org

We have the FCC License for our new station!

With your help...WE CAN BE STREAMING RADIO VERY SOON.

The San Diego Community Radio Project will share the news about Activist San Diego 's in-the-works, full-power FM station and INTERNET RADIO. The signal will transmit out of Descanso, with a parallel Internet radio stream and studios based in City Heights. ASD is a 12-year-old 501c3 with a rock-solid mission of networking for social justice.

We are tired of corporate misinformation and monopolized media. We were heartbroken with the loss of KLSD; we had hopes with Liberty One; Is San Diego County ready for this NCE (non-commercial, educational, listener- supported) endeavor lead by progressives? You can help make it happen. creating a commons!

Each One, Teach One; Pass the Microphone; Pay It Forward