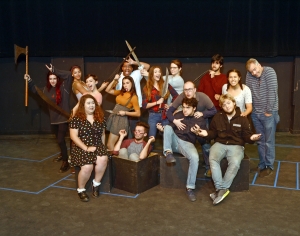 December 4, 2018 (La Mesa) - Dungeons and Dragons, geek world, are popular today but not so much in Athens, Ohio back in 1995. Today we live in a world where monsters are cool and everyone identifies with being a hero. Back then, geeks, people who did not fit in, would escape into a world of their own, a game called Dungeons and Dragons, to become strong and brave, heroes, masters of their own fate.

It's in this world that  "She Kills Monsters," takes place. In the imaginary land of New Landia, the play is a story of two sisters. Agnes, the older sister is referred to as average. Tilly, her 15-year-old sister, lives in her own world. Agnes wishes for something more in her life. Then fate kills her family in a car crash.

Agnes finds a notebook among her sister’s things containing a Dungeons and Dragon world--her sister Tilly's world.  Agnes wants to know Tilly, the sister she basically ignored, better. So she finds a high school Dragon Master and takes on the quest her sister wrote about in the notebook. In  Dungeons and Dragons, an imaginary tale, Tilly is alive. The sisters go through the challenge together. Agnes learns truths she had never imagined, and discovers herself in the process.

The story worked for me and I know very little of this role playing game. It's funny and engaging; the audience loved the show. It's a great show for college peers. When I heard the title I'm thinking, “not really my thing.”  But don't think that.  It's great acting, great costumes and a story most people will enjoy for a good time.

With the world of technology today, plays have come so far. The backdrop of New Landia was amazing. Basically a vertically three tiered brick tiled wall with paper crumpled along the top edge gives a jagged affect. Then the computer projected images fit the backdrop perfectly, with Dungeons and Dragons sci-fi fictional world photos and the play comes to life. This technique brings so much more to the show.

The play is narrated by Martina Lopez, doing a wonderful job of grabbing our attention, dragging us into the story.  She also plays evil Tina, one of two mean cheerleader vampires. Such fun characters! The lead of Agnes is played by Laurissa Rudgers, and her sister Tilly by Sofia Scaifi. Their acting is spot on and the characters are ones that kids today can really identify with. The other main parts are Chuck, the Dragon master, played by C.J. Ishee and Mike, Agnes's boyfriend, played by Kristian Power. My favorite character, Orcus, is played by Jon Agee. Others are Lillith, played by Sarah Ladeby, Symonne Still a, Kallope and Vera, Agnes's friend, played by Elizabeth Cisneros.

The play is directed by Jason Heil and written by Qui Nguyen. It’s use of imagination provides a place we all need to visit more, to put down our electronic devices and live.

Come escape your average world and have some fun.

Thursday, Friday and Saturday through Dec. 8 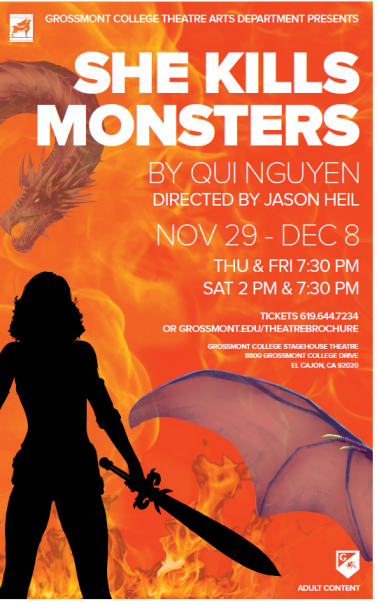