December 8, 2020 (La Mesa) - Dateline with a touch of Glee sprinkled in best describes this virtual performance by Lamplighters Theatre in La Mesa. Director O.P. Hadlock's The Absolute Brightness of Leonard Pelkey shines a light on two things: first, the brilliant acting of James Steinberg, portraying eight characters in this one man show. It takes a great talent to pull shows like this off and have viewers leave feeling as if a whole group of people were witnessed.

Second, the show celebrates that what makes us different, makes us shine--something everyone needs to focus on these days. Leonard was brightness personified and told repeatedly he should want to tone things down, but he never did. Although only 14 years old, he was unapologetically himself. Some may argue that that’s why he was killed. But if he listened and hid within himself, he would have been dying on the inside.

The show starts when Leonard's aunt coming in to the police station to report him missing. The story is told from the detective’s point of view, who, after interviewing people in Leonard's world, finds him in the river. The setting is the Jersey Shore. Everyone who knew him was affected profoundly by this teenage boy's light and outlook on life. 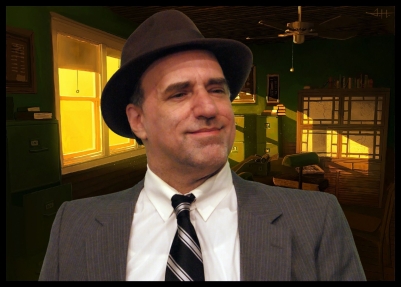 What the world clearly needs is acceptance of the Leonards in our world, and hopefully someday we will get there.
December 11, 12, 13.  Friday & Saturday at 8:00 p.m., Sunday at 2:00 p.m.
The ticket price is $15 per household, less than a regular single ticket. To purchase your ticket online, please go to https://www.showtix4u.com/events/Leonard_Pelkey_Tickets?fbclid=IwAR3BWtIKAFL0Bn1_XGR4vUxttH_qPpizvSok681pOgAK1cm-bY3c9aCJvFM.  When there, you click on the weekend that you would like to view the show. They will send you a link for you to use anytime over the weekend. The site is 100% secure.