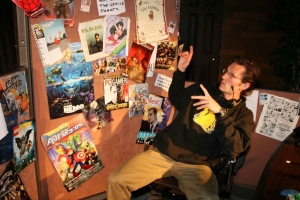 By Phyllis Mutta and Takayuki Higuchi

“Hilarious and entertaining” – Takayuki Higuchi
“This play is a must-see for everybody.” – Phyllis Mutta

May 13, 2010 (San Diego) – ECM reviewer Walter G. Meyer’s new play, GAM3RS, opened May 7th at the Ion Theatre in Hillcrest off of 6th Avenue. This one-man show captures today’s contemporary life in which sublimation and escapism through online gaming is a norm--a world where lines between reality and fantasy become blurred as real working professionals, while going about their daily job routines, become engulfed in a “Land Made of Awesome” populated by elves, warriors, knights and orcs. The result is hilarious and entertaining, probing the psyche of gamers with sensitivity and credibility. 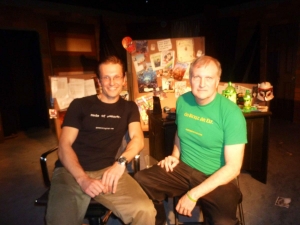 Initially incepted as a 15-minute graduate thesis performance project by the main (and only protagonist) Brian Bielawski, GAM3Rs progressed into a full-fledged play when Bielawski procured the help of professional writer Walter G. Meyer. Together, they developed the plot from a story which sought to warn about the evils of online gaming to one which instead ironically uncovered constructive skills that could come out of gaming. In his own words, Beilewski cites “social networks, problem solving challenges, a chance to healthily live out fantasies” as a few of these positives.

Full of wit, sarcastic dry humor, techie jargon and pop cultural nuances, GAM3RS explores the world of Steve--your everyday brilliant, nerdy MIT dropout who happens to be hopelessly underpaid yet over-qualified for his job as a computer technical support technician. 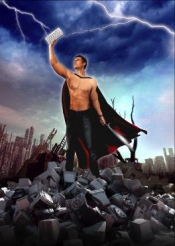 he play begins with a spotlight on Steve entering his cubicle (read: office space) in full warrior-like demeanor. He immediately launches into a tirade as his alter-ego ‘Boreas’, proclaiming how he and his fellow avatar warriors will save the world and reclaim their kingdom from the evil elves. Almost immediately, he reverts to his true self as ‘Steve’ answering phone lines with his everyday one-line office greeting, “Tech support this is Steve, how can I help you?”

Steve must juggle this daily routine, going back and forth between his two identities while hiding his stunts from a boss with a Svengali-like hold on the office goings-on. As if this is not bad enough, he has to deal with an older cubicle mate/tech support worker named Bob who has the qualified credentials for his position but lacks the technical know-how of the computer/geeky world that comes so easily to Steve. In addition, there are personal relationships with a pesky, meddlesome mother as well as a girlfriend and best friend who lately both feel neglected and taken for granted by Steve.

The script reveals Steve’s passion for the game and obsession with a mysterious world that entices him to put aside the priorities of personal relationships and ultimately his work. In online gaming, collaborative interaction is all that matters, while players enjoy the same world with others around the globe. The play showcases the dynamic excessive actions of Steve (Boreas), whether he is speaking in technical game terminology or fielding silly questions from a customer. Thanks to the actor’s strong portrayal of the fast-talking character, the audience becomes drawn into his confusing, funny, and unpredictable shifts between real and fantasy worlds. 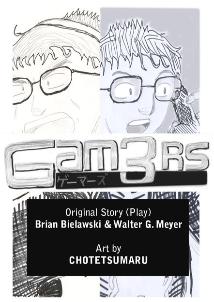 Meyer and Bielawski avoid the cliché depiction of a gamer as someone who stays home and avoids social relationships, instead portraying an ordinary person with an addiction that others may relate to if they have battled addictions such as sports or alcohol. As Boreas consumes more and more of Steve’s persona, we find ourselves caught up in his identity struggle.

To the spectator, GAM3RS feels very real; there exists a connection to the audience with Steve without which the play would have been reduced to pure chaos. The play succeeds in portraying the innocent yet vigorous freedom Steve finds as a rebellious yet proudly independent unconventional character confronting non-normative forms of social behavior yet remaining true to himself. His story is an American story; the audience feels like they know a “Steve” or perhaps themselves have gotten lost in a fantasy not unlike Steve’s just to get through the day.

GAM3RS endorses the notion that in today’s recession-fueled corporate world, the professional working individual must permit him/herself certain eccentricities in order to cope with the daily pervasive, mundane drabness of everyday life.

This play is a must see for everybody. One does not feel lost in the techie lingo; instead, I predict audiences will find themselves laughing, nodding, cheering and drawing parallels with South Park, and other social commentary shows in today’s world.

There is also a twist to the ending that’s well worth the wait. It truly is a play “Made of Awesome!”

GAM3RS opened May 7th and runs every Friday and Saturday through June 5th, starting at 10:30 p.m. Tickets are available in advance at www.gam3rsthewebsite.com  NOTE: By popular demand, the play's run has been extended.  See playwright's post in comments below for details.

By popular demand, GAM3RS' run at the ion theater in San Diego has been held over two more weeks.

Two shows added, and good new for early-bird types, these will be early evening shows so you can still be in bed at a reasonable hour.