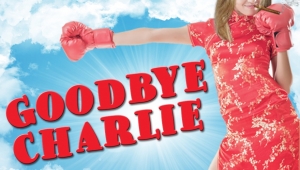 Already I'm glad to see the word is getting out, as I noticed a few more seats filled this time around.

Goodbye Charlie, interesting and well-acted. Loveable characters. I do feel that although enjoyable the show missed on it's comedic timing. We laughed some but probably not as much as they would like. And the ending a little different than the movie left us a bit confused.

Goodbye Charlie in the summer of 1964 a few miles north of Malibu. The story of Sorel. A writer and Lothario. Who is shot trying to escape from his lover's yacht porthole. He comes back as a woman or does he ? God's ultimate joke.

Kristen Fogle does a tremendous job in the part of Charlie. A complex character of a female playing a man, playing a woman. Eric Casalini, plays George, the other main character and lead. Devi Noel plays Rusty, and Lynda Lee Real plays Franny. The talented group.who make this story happen. The cast rounds out with the talent of Paul Roger, Ken Baker, and Patrick Griffin.

Come out soon and join the Lamplighter Community.

Coming April 10 - May 3, The Hallelujah Girls, a comedy by Jesse Jones, Nicholas Hope and James Wooten

One of these comedies is sure to be the perfect show for your night out.