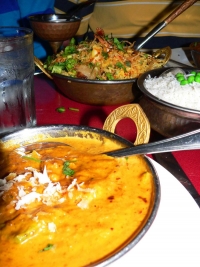 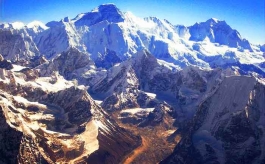 Himalayan dishes are healthy fare, typically made with an abundance of vegetables, spices, lentils, rice, and chunks of tender meats—though there are plenty of items on the menu for vegetarian diners. I started my feast with a Himalayan salad and home made daal (lentil) soup, which was thick and tasty. Tandoori chicken, slow-cooked in a clay oven, was tender and flavorful with just the right blend of yogurt and spices including saffron for a rich, golden color. Freshly-baked buttery Naan bread with a side of mango chutney, along with Basmati rice, rounded out my sumptuous meal. 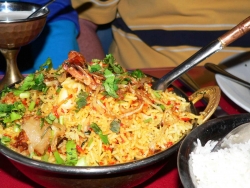 My companions sampled chicken curry and Himalayan biryani. The latter dish blends shrimp, lamb and vegetables with paneer (cheese) and Basmati rice, served with a side of Raita (yogurt and cucumber). For dessert, we settled on kheer (rice pudding) and mango kulfi, an Indian-style ice cream. All were satisfying, served up in hammered copper or other traditional Himalayan serving ware. 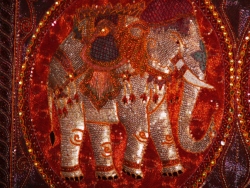 In Nepal, tradition dictates that foods be eaten with the right hand. Being a lefty, I was gratified to find Western-style table utensils. Otherwise the ambience exuded authenticity, complete with beaded elephant artwork , ornate teapot, and photos of the Himalayan mountains.

Beverage options include chai tea, mango lassi (a spiced yogurt drink), and a recent addition, an assortment of Himalayan beers.

The service was excellent and the prices reasonable. The same proprietor also owns the Monsoon Express in Mission Valley, as well as Dante's in Grossmont Center.

Located in a small shopping center at the corner of El Cajon Boulevard and Baltimore Drive, Himalayan Cuisine offers a welcome vacation for your palate. No need to scale a Himalayan peak or fly to Kathmandu: you will find Nirvana here.