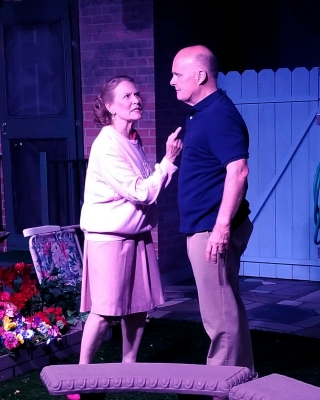 September 12, 2021 (Poway) - Powpac Community Theatre presents "Native Gardens," a comedy written by Karen Zacarias.   It’s described as "humorous, neighbors feuding," showing the best and the worst of new neighbors. "Family, life and growing together to become bigger than the issue at hand."  Zacarias had one simple hope for her play:  the audience would take a few moments to ponder the question, how can I be a better neighbor?

When I first saw the title of this play, the title did not entice me.  I didn't know what a native garden was. It's an ecological, environmentally safe, natural garden which include native plants that do not require fertilizers and require fewer pesticides--plants Mr. Butley, a flower enthusiast, called weeds.  "The difference between a flower and a weed....is a judgement." 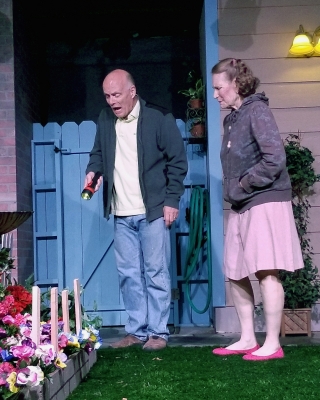 Native Garden is, in fact, the story of two couples. An older couple has been living in their affluent Washington neighborhood for over 30 years when a younger Latino couple move in next door. When Pablo surprises his wife, who is due to deliver a baby in five weeks and is trying to finish her dissertation before delivery, he has inadvertently invited his whole law firm of 60 people over for dinner. His wife is none too thrilled. The house is a fixer upper and they have barely begun. They decide to go with a backyard barbeque. The yard is a mess, but can be managed in a week's time frame.

They decide that the little white fence between them and the neighbor must go. So thay head on over to see if the neighbors will agree. The neighbors are overcome with happiness; they hate the fence. With this the neighbors start off cordially. But when the Del Valles look at the house plans to measure for the new fence, they realize the property is in the wrong place and Mr. Butley's prize garden is on the Del Valle's side...tbattle ensues. 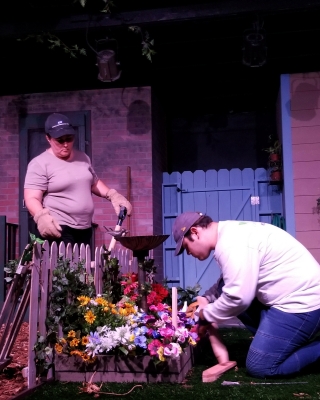 Directed by Annette Alliano, the play has four main characters, and three basically walk-on roles. My sister and I loved Mr. Butley; he tickled our funny bone the most, and was played by David Dartt. Peggy Schneider, as his wife, is obviously a veteran talent. Babak Shahrokh was not quite as polished as Pablo. His wife was played by Lauren Bremiller, coming across as authentic. All of the roles were totally relatable. Also in the show are Jaime Perry, and Deanne Theodore.

One of my favorite things about Powpac is the sets.and this show is no exception, with a wonderful set of two backyards.

The best medicine is laughter and we all need a shot. Come support community theatre.

Masks to be worn.

Dashing Through the Snow