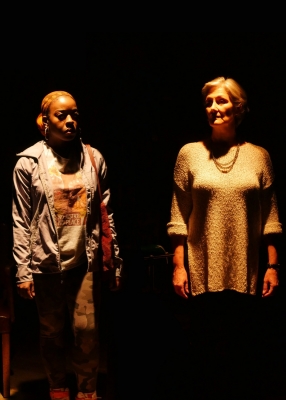 October 3, 2020 (La Mesa) - Moxie Theatre finds a way to bring us entertaining digital theatre with Niceties by Elenor Burgess. The play is powerful, thought provoking, emotionally challenging entertainment--perfectly timed for the climate of the country.

Live entertainment has been tough since COVID-19 hit in March. Virtually nonexistent for theatres. For producers, directors, actors and all jobs surrounding a production, it has been especially difficult. This is their passion, what they live for. To remove something this vital from their lives is devastating. Thus, they have continued to find ways to move forward. At first we had Zoom readings, then we moved into costumes and Zoom backgrounds. The acting on some of these was phenomenal, especially considering the actors were in different locations.

Now we are moving into shows with a couple people taped on the theatre's actual stage with regular sets, like a movie but this is a live play.  Niceties is staged in a University professor's office. 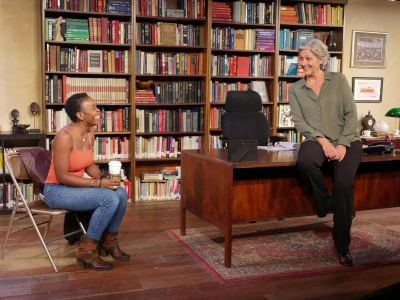 Niceties, directed by Delicia Turner Sonnenberg, is the contemporary story about a woman of color who writes a historical paper at a university. She comes in to discuss the paper with her older, white female professor. Which basically becomes a racial debate over the lack of correct content and physical evidence to support black history culture. It’s an impactful story, which may not sound like something you would like. However, the two actors, Deja Fields and Mouchette van Helsdingen, do such a fabulous job of drawing you into their world, you can not help but respect each perspective in today's times. This is recommended for everyone for an eye opening experience.

Niceties is due to close on October 4th, but it has been requested by audiences for more performances so students may be able to see the show. Moxie is trying to schedule more shows for mid-November, including a special closed-caption show with an ASL interpreter.

Niceties is told in two acts. The first is an hour, with a five minute intermission and the second act 40 minutes. If you want to see the show, please check out the Moxie website. www.moxietheatre.com.