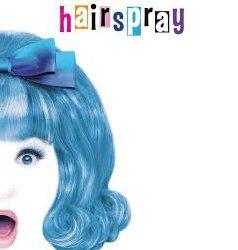 presented at The Joan B. Kroc Performing Arts Center

March 7, 2015 (La Mesa) - Sensational, High Energy, Quality Entertainment. That's what Yat, winners of the 2014 Best Youth Theatre production in San Diego County for "West Side Story, brought to the audience for "Hairspray." I loved this play. The wonderful magnetic beat of Tracy Tumblad and her friends.

I much preferred this play over last years winner. Although after recently witnessing another round of West Side Story, see what an amazing job these young adults pulled off. The performers of Yat in this division are from 14 to 26. And the shows keep getting better and better, Young Actors Theatre also has a younger division. After watching shows with the younger kids the past couple of years, of which I was totally impressed. I now see the older kids from the younger group moving up to do an incredible job, Too cool. And what talent.

Hairspray is the story of Tracy Tumblad, a plump teenager who loves to dance. When she lands her dream spot on the Corny Collins dance show, she uses her overnight success to launch a platform to integrate the show. Although the show has the more serious undertones of segregation,, in this rendition it's so low key, I mean it's there but the enthusiasm and zeal of the principle players bring such joy you almost overlook the importance of the issue.

The story takes place in Baltimore during the sixties. Filled with the rythmetic songs, such as "Good Morning Baltimore", "Mama" I'm a Big Girl Now," and "The Big Dollhouse." A show of music and dance and the entire cast rocked it. Thanks Perry Lee for the great choreography, and .Jim Tomkins-Maclaine as musical director. One of the benefits of performing at Joan Kroc is room for an orchestra. What a treat for both the performers and the audience. Bringing the show to the next level.

Which brings us to the cast. A huge wonderful cast. Normally I like to have a standout performance. In this show everyone had standout performances. Starting with Ariella Kvashny as Tracy. She was so charismatic. Eric Velaquez and Ryan Dietrich, as Tracy's parents. And let my just say the parents were portrayed by a beloved well known couple in last years Welk rendition, and they had nothing on Velaquez and Dietrich. Megan Singer played Tracy's friend Penny, and was the best I've seen. Keyonte Harper Burton played Seaweed,  what a fabulous job by a first timer. Eboni Muse brought the house down as Motermoth Maybelle singing " I Know Where I've been." Ciela Pinon nailed Little Inez. Maggie Cole had her moment as the Matron and Chandler Churchill as the Gym teacher. Danielle Gulihur smashed Velma Von Tussle.Not to mention Noah Hartwell as heart throb Link Larkin, who falls in love with Tracy, reminding me of Luke Perry in his younger days.

Director Jean Issac actors knock another one out of the park. I've see two other versions of "Hairspray," both excellent top-notch versions, and they had nothing on this one. Total entertainment for everyone.

Treat yourself to a Yat show soon.  Coming next will be the 8 - 14 division in "Peter Pan" and I'm looking forward to seeing the younger ones again.