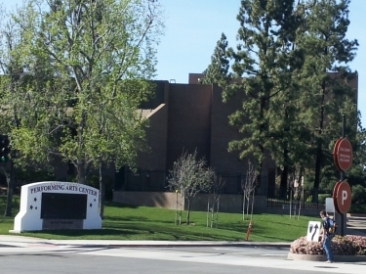 February 17, 2017 (El Cajon)—As the old saying goes, “It isn’t over ‘til the fat lady sings.”  Just a few years ago, the East County Performing Arts Center (ECPAC) faced possible demise.  It’s remained closed since December 2009.  But the curtain may soon rise again, bringing back stellar entertainment to our region.

Ever since it was built by the Grossmont-Cuyamaca College District and opened some 45 years ago, El Cajon’s ECPAC  has been recognized as a premier performance venue with its excellent acoustics and sightlines. But for the college, the City of El Cajon and the different management groups who have tried to make it financially viable over the years, it has been a white elephant. In fact, the 1,100 seat facility almost met its maker several years ago, when plans were drawn to tear down the theater and build in its place a Marriott Courtyard hotel.

With the theater mothballed for the past seven years, the El Cajon City Council unanimously voted 5-0 on Wednesday to authorize City Manager Doug Wiliford to negotiate a management agreement with Live Nation to manage and operate the shuttered theater. Live Nation is the world’s largest promoter and producer of concerts and live entertainment events. It currently produces shows at the Viejas Arena at Aztec Bowl, Valley View Casino Center (San Diego Sports Arena), Qualcomm Stadium, and the Mattress Firm (formerly Sleep Train and Cricket Wireless) Amphitheatre in Chula Vista.

Ray Lutz of Citizens Oversight, a staunch, frequent critic of the council’s actions regarding the restoration and reopening of the theater, praised the council for undertaking the action as its first concrete steps towards reopening the theater. “This is like asking Starbucks to open a coffee shop in the community. You couldn’t ask for a better situation,” Lutz said, referencing the globally successful coffee chain.

Bob McClellan, a member of the City Council who has cast many votes regarding the embattled theater including votes to hire and fire previous management organizations, was also quick to praise Wiliford’s initiative to seek Live Nation’s management of the theater as a “great step forward.” “We would get no better of a management situation than with a recognized producer of shows like Live Nation,” McClelland said prior to the Council’s vote.

According to WIliford, Live Nation’s senior management toured the theater several times last fall. After consultation with the concert producer regarding their firm’s interest in running the theater, Live Nation authorized Wiliford to seek City Council approval on initiating formal negotiations. A draft agreement is expected to be submitted to the City Council within 90 days.

“They are the world’s largest live entertainment company. They are level of professionalism that is unsurpassed in the industry,” Williford said. He said that despite Live Nation producing many shows in San Diego, they were unaware of the existence of ECPAC.

Wiliford cautioned that the opening of negotiations does not mean the theater will reopen immediately. Should the negotiations be successful, Live Nation will take on an active role in the planned remodeling and refurbishment of the theater, which is expected to cost some $2.9 million dollars including making the facility compliant with the Americans With Disabilities Act, upgrading concessions plus making other repairs and improvements.

The earliest the theater might reopen is will be the middle of 2018.

Repairs to the theater’s roof have already been completed. “We pretty much know what has to be done to the building,” Mayor Bill Wells said. Plans tentatively would have Live Nation have first priority for concert dates on prime evenings, with the three-or-four remaining days given back to the City of El Cajon for its and other community group uses. The theater is expected to be a destination venue for up-and-coming west coast artists, specialty shows, and entertainment geared to El Cajon’s large Middle East community.

ECPAC has had a troubled past since its groundbreaking in 1973 as a joint project by the City of El Cajon and the Grossmont-Cuyamaca College District. The theater has always been recognized for its optimum sight lines and accolades for its excellent acoustics, but has  been mired in a never-ending management volleyball game between the city and the community college district and different local management groups, including El Cajon’s Christian Community Theater, which managed it twice, and a citizen-run cooperative Arts Center Foundation, Inc. Despite bringing major name performances to the theater, the Arts Center Foundation was fired when it missed a loan payment to the City of El Cajon in November 2004.  The theatre fell into disrepair; objections from citizens helped prevent the City from tearing down the performing arts center.

If Live Nation takes over running the Theatre, it would be the first internationally recognized concert management company to do so.