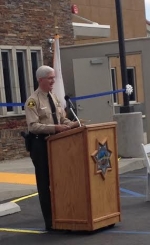 "It means a faster response time and ...a higher level of public safety in all of these neighborhoods." -- Supervisor Dianne Jacob

The new station is a 27,000 square foot station on approximately five acres of a 14.8 acre County-owned site. It is equipped with a generator that will keep the station fully operational. This allows the station to be utilized as an Incident Command Post in the event of an emergency situation such as fires and earthquakes. 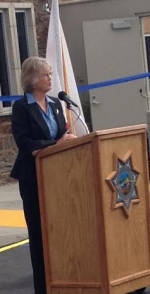 Sheriff Gore began. “We welcome you all here. This is a great occasion for the residents of East County, for the Sheriff’s department, and it’s just my honor to be here to preside over the grand opening of our new Rancho San Diego Police station.”  He thanked Jacob, Penick, Skyline Wesleyan Church senior pastor Jim Garlow and his wife Rosemary, CHP Chief Jim Ablee, La Mesa Police Chief Ed Aceves, El Cajon Police Chief Jim Redman, and Rancho San Diego Police Acting Captain Lt. Mike Knobbe. He continued, “Thank you all for being here. It’s really a great occasion for the sheriff’s department and out here in East County. This is a project that started a little over two years ago.” The ground breaking was November 18.  Gore concluded, “This will bring easier access to the sheriff’s department.”

Next was Jacob. “I’m really excited and I know you are too. This has been a long time in coming and I couldn’t be more thrilled.. It’s good for the people who live in the area… Sheriff, we waited quite a long time for this.”

She then talked about the past. “It was back in 1997 and my current Chief of Staff Jeff Collins.. . drafted the board action that my colleagues supported back then 17 years ago to start this process.. It was Sheriff Bill Colander at the time. He and I looked and looked for a site,” she recalled.  Pastor Jim Garlow arranged for Skyline Church to sell five acres to the County.

Jacob continued, “I had a chance to go through it earlier. It is a phenomenal facility.. There’ll be about 100 deputies.. It means a faster response time [and] it means higher level of public safety in all of these neighborhoods. And that’s our number one priority. It always is public safety.. This building is wonderful, but… most important are those who work here.”

Penick then spoke. “The guys have been in their new home now for a few weeks and I see signs of activity.. It’s just beautiful to see it operating after all this time.. But I’m just more pleased than ever to be here today.” He thanked a number of people, including Jeff Katz, who helped with the construction. “He’s a great designer. We’ve done a lot of work together over the years, and I’m proud to say he’s done a wonderful job.. Construction took us approximately 15 months..”

After the ribbon was cut, a tour was led into the facility which included a fitness room, locker room, and offices for the sheriffs and deputies among others.

Miss Rancho San Diego Kaci McCorkell told ECM her thoughts. “I’m really excited for it to open.. I know that the community’s excited; they’re going to feel more protected, especially with the faster response times, like they had said earlier in their speech, so I think it’s going to be great for the community.”