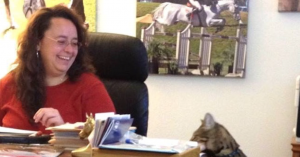 February 8, 2015 (Ramona) – Nearly 80 riders on horseback hit the trail Saturday in Ramona to help pay medical bills for Lynn Fuller, a Poway resident who suffered burns over more than 75% of her body.

Fuller’s boyfriend, Vidal Webb,  set fire to her while she was sleeping and also burned her home. He later committed suicide in the county jail.

Fuller has no health insurance. She has undergone skin graft surgeries and remains in a medically induced coma at UCSD Medical Center, but her condition is improving and she is expected to survive.   Her sister and niece, who lived with her, also lost their home, and some funds are also intended to help the family afford another home.

Christen Hanley worked with Fuller, an assistant to an equine veterinarian. “I couldn’t even fathom who could have done something to one of the nicest, warmest, friendliest, most positive, sweetest people that I have known,” Hanley said, Fox News reports.

So the equestrian community pulled together to help at Saturday’s ride, which also included a silent auction.

A donation page to help with Fuller’s medical bills has been set up at Give Forward.   The goal is to raise $500,000. So far, 13% of that goal, over $64,000, has been raised including $9,000 from Saturday’s trail ride in Ramona, which was organized by Tiffany Neal, another friend of Fuller’s.