Our stockings are hung by the chimney with care

Of course, you knew that.  Come November, neither you, we, nor anyone within earshot is exempt from visions of sugar plums, the hope of reindeer hooves on the roof, the hearkening to Donner and Blitzen, and the careful setting out of a post prandial libation and figgy pudding for The Great Claus.

He is William Swank and the name fits.  He is swell, swank, super-duper and silver-tongued.  He's been Santa Claus for 14 years, including seven in the Spreckels Organ Pavilion. He's an author of 10 books, too, bringing us to the main event. 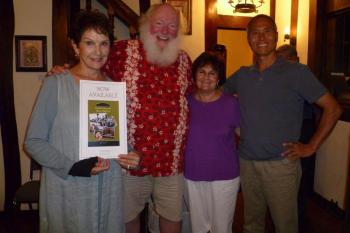 On Nov. 5 Santa Swank will regale us with "Christmas in San Diego," his new book about how SoCal residents, bereft of mittens, icicles and frozen noses, search for Christmas in the best climate on earth. The book is full of great photos of this hunt, among them a shot of a snowman in Lemon Grove the year snow fell on The Big Lemon.  (You had to be there, something few will admit to unless they've had a ton of work done.)

P. S.  Santa Swank is also a major baseball fan and wizard.  So, dear readers, as we bid farewell to the 2015 World Series and herald the holiday season, we have the perfect "History Alive" lecture for you.  See you Thursday!

The "History Alive" series is free, 38 and suitable for ages 14 and over. Videotaping of lectures is made possible by a Community Enhancement Grant from the San Diego Board of Supervisors on the recommendation of Supervisor Dianne Jacob, District 2.  Ancillary costs of the series are underwritten in part by the Mary England Endowment for Education.