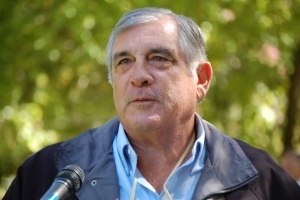 Daniel Tucker, chairman of the California Nations Indian Gaming Association (CNIGA) presented the award on behalf of the association.

“Like Anna Sandoval, Chairman Mazzetti is a staunch supporter of tribal sovereignty and tribal government gaming. Rincon is always willing to back up their beliefs with action,” stated Tucker. An example is the bad faith lawsuit against former Governor Arnold Schwarzenegger, a six-year court battle that changed the rules for tribal state compact agreements, and was victorious at the United States Supreme Court.

“This is a serious honor and I am deeply moved,” said Mazzetti upon receipt of the award. Known for his friendly manner and easy humor, Mazzetti was recognized for the Rincon Band’s economic development under his leadership. Last year, the tribe completed a major $200 million dollar expansion of its gaming property and name change from Harrah’s Rincon to Harrah’s Resort Southern California.

“We certainly deserve an award for courage and optimism, as we approved the funds for the Harrah’s expansion during the recession, when the local economy was in questionable condition,” noted Mazzetti, pointing out that the decision has proven to be good timing for today’s market.

Along with adding numerous award-winning resort amenities and features, the resort currently boasts the second largest number of guest rooms in San Diego County and nationally recognized brands like Starbucks, Pinks Hot Dogs, and the Earle of Sandwich. The tribe’s investment portfolio includes a number of diverse product companies, not located on the reservation, and a Travel Plaza on the Rincon reservation, featuring the first 7-Eleven franchise with an American Indian tribe and a Subway restaurant.

Mazzetti has been instrumental in shouldering the 46-year-old San Luis Rey River water battle to return a share of water to five north county tribes—river water that was diverted in the early 1900’s, devastating the tribes’ agriculture and commercial resources. The water was given away illegally by the Federal government--an action that the tribes and involved water districts have been working to correct with a compromise settlement.

”We are expecting approval of a bill in the Congress this year that will bring to an end years of costly litigation, complicated negotiations, and frustration,” he explained.

While an advocate of Indians in high –level executive office in the governor’s cabinet, Mazzetti urged tribal leaders to invest more time and energy in meeting with each other “face to face.”

“We need to meet as tribal leaders without lawyers, and lobbyists, and other staff” to discuss our issues and come to consensus. That’s the old way, the Indian way, and we need to get back to it, talking to each other as leaders, not through others.”

True to his word, Mazzetti has been active in exporting the example of the Southern California Tribal Chairman’s Association (SCTCA) to the Northern and Central regions of California, to create an active advocate in local regions, as well as tribal leadership conduit for statewide issues and cooperation.

This is wonderful news! Congratulations to Bo Mazzetti, Chairman, the Rincon Band of Luiseño Indians, for winning the Fifth Annual Anna Sandoval Leadership Award. His demonstration of strong leadership skills is a great example for the younger generation to follow. Furthermore, his suggestion to return to talking to one another rather than through others, and his willingness to extend beyond his own band regarding statewide issues exemplifies what is called "ga du gi", in the Cherokee Language, meaning "the spirit of cooperation". No better way to get things done! It is always good news to hear of the progress of Native American tribes, nations and bands. KB Schaller, Author http://KBSchaller.com/