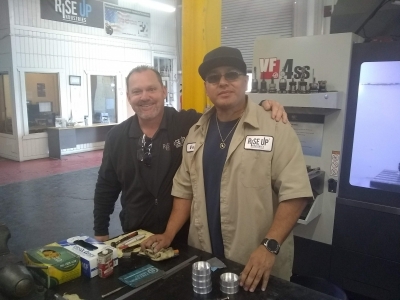 By Mike Allen
Photo:  Dustin Greeves and Ernie Garcia
April 25, 2019 (Santee) -- A small nonprofit in Santee is making its mark as a proven transition agent, giving newly-released longtime prisoners a chance for a new life while providing skilled workers for local businesses.

At Rise Up Industries (www.riseupindustries.org) change doesn’t come quickly and the numbers of those enrolled or completing the program may not initially impress. But for the four graduates of the 18- month program, it’s been a godsend.

“One of the things that drew me to the program was the tattoo removal. That has allowed me to reinvent myself,” said Joe Tapia, who is starting a new job next month as a machine operator after nearly 34 years in prison.
“This is a program that’s for us, but it’s just not about us,” said Tapia, 55. He explained that he’s got a bunch of speaking engagements lined up in the coming weeks before youth and other organizations to give them an insight into the waste that gang life is, and how young people can make wiser decisions than he did.
“Not only is (Rise Up) giving us an opportunity to re-acclimate to society…it’s giving people in the free world a chance to shift their perspective to people who lived a certain lifestyle and are trying their best to change their lives,” Tapia said.
In addition to extensive classroom and on-the-job training to operate computerized machinery, the ex-offenders who are the focus of Rise Up also receive comprehensive counseling and real-life skills to improve their chances of surviving in the free world, and don’t slide back into the criminal life. 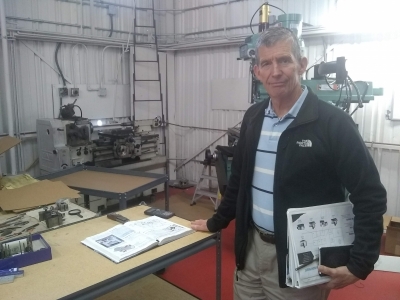 Photo, right:  Joe Gilbreath
After they’re released from prison about 55 percent of inmates become repeat offenders, said Ross Provenzano, who helped found Rise Up along with Joe Gilbreath in 2013.
Before they started the program, Provenzano and Gilbreath were working with long-term prisoners in a ministry at Richard J. Donavan Corrections Facility in Otay Mesa. They’d talk with “lifers” who were about to be released and ask them about their plans, and surprise, they usually had none.
Without any skills, many were destined to fall back into their old ways, likely to get busted again, and return to a prison cell, said Provenzano, a real estate property manager who spent most of his career in East County and serves as Rise Up’s president.
“It was like a revolving door for many of these guys, they’d get out, fail to find a job, and then commit a crime and they’d be right back in where they were before,” he said.
To break the cycle, prisoners needed not only a job, but  some help in getting used to all sorts of things that most people take for granted. Just learning how to use a cell phone, how to rent a place to live, and figuring out a budget and sticking to it were all skills most lifers needed some help with, Gilbreath said.
Rise Up is modeled after a gang prevention/intervention program launched in Los Angeles by Fr. Gregory Boyle in the late 1980s. Today, Homeboy Industries is a diversified nonprofit that employs more than 200 people and makes a major difference in combating the gang culture in the nation’s second largest city.
Like Homeboy, Rise Up Industries teaches newly released prisoners skills for both the silk-screening trade and the coffee roasting business. These segments give former inmates experience as they make their transition to a new life. But it’s really through the training on computerized numeric control machines (CNC) that Rise Up is having a significant impact. 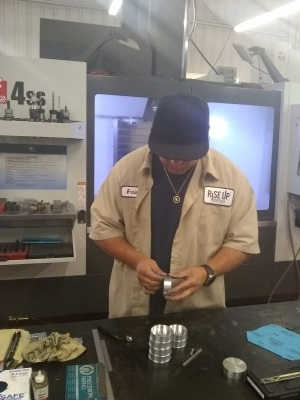 Photo, right:  Ernie Garcia working on molded parts
One of Rise Up’s first graduates just happened to be a trained machinist, and suggested to Gilbreath that setting up a machine shop might resonate with a lot of ex-offenders. It was something the program’s founders hadn’t considered but soon realized was the right move.
Local manufacturers were ramping up operations, and were desperately seeking skilled machinists, and those with CNC skills were in especially high demand, Gilbreath said.
“Many of the experienced machinists are Baby Boomers and are retiring, but the businesses are expanding so there’s a lot of jobs to fill,” he said. “But companies can’t find qualified workers.”
The CNC program teaches people not only how to use cutting and lathe machinery, but the far more complex machines that require math and programming skills. The jobs in this segment all pay well above average wages, and experienced CNC operators can earn six figure salaries, Gilbreath said.
In addition to classroom training by longtime, experienced CNC operators, the men all receive hands-on training on the five machines Rise Up now has. The training involves contract work for area manufacturers, including several aerospace manufacturers. In all, Rise Up has 34 customers, many of which are repeat customers because of the quality of workmanship, said Gilbreath, Rise Up’s executive director and a retired U.S. Army colonel.
“They do an excellent job, for us,” said Frank Cozza, founder and CEO of Gondola Skate, a Santee maker of industrial components that attach to shelves used by major retailers.
“We send them parts to be made all the time. When we were sending out for parts (to be produced) at other shops sometimes there were mistakes that caused us to have to send them back to be redone, but since we’ve been sending them (to Rise Up) we haven’t had to send any back,” Cozza said.
Gondola Skate makes “fixture mobilization systems,” a fancy term for components attached to shelving that allows retailers to move shelves without unloading all the products, saving lots of time. Among the company’s customers are Wal-Mart, Lowe’s, Rite Aid, and Costco.
Impressed by the quality of the workmanship by Rise Up Industries, Cozza subleased a big part of his warehouse to the nonprofit, allowing the program to expand the number of machines it has and bring in more released prisoners.
Ultimately, Rise Up’s five-year plan calls for the program to double its capacity and have 24 members learning skills at any time, graduating four people each quarter or 16 each year, Gilbreath said.
That means the program needs to raise a whole lot more money. This year’s budget is about $1 million and includes salary for its six employees and the ex-inmates, as well as all the operating expenses.
Provenzano says it’s important not to just look at the numbers. “We’re not in the numbers game,” he says. “We’re not after volume, we’re after quality.”
Just look at Angel Ramirez, another graduate of Rise Up, Provenzano points out. “Here was a guy who was in prison for 41 years, and now he’s earning a paycheck, is back with his family, and is a productive member of the community…Here’s a guy whose whole life is changed.”
Rise Up is attempting to change lots of things, not the least of which is the allure of gangs, which are now recruiting people as young as 10. These young people join gangs because they want to belong to something, Gilbreath says.
The number of documented gangs in San Diego is about 285, and includes some 3,000 people, he said.
Yes, there are other nonprofits aimed at helping ex-inmates to find gainful employment by teaching them job finding and interviewing skills, but “they don’t teach them real job skills,” Gilbreath says.
Provenzano says getting into Rise Up isn’t easy. “They have to go through a rough interview process because we’re looking for only the best candidates,” he said. “The day they come out, we tell them we’re going to pay you to learn a job you can do for the rest of your life.”

I wonder if these folks can "fix" sex offenders. Sure would be a good thing.