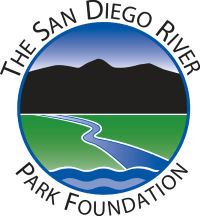 For ten years the San Diego River Park Foundation has been working to improve quality of life, along with our river and our community. You're invited to join supporters for great food, drink and friends while showing your support for the River Park Foundation. $75 per person includes appetizers and a hosted bar, auction and more.
Click Here for Details and To Purchase a Ticket(s)
Born of a multi-million gallon sewage spill that ran into the river for several days, the River Park Foundation was founded to give a voice to our namesake river and to engage the community in caring for a river that has served the people of San Diego for over 9,000 years.

In order to help reverse years of neglect that the river has undergone and build stewardship of this historic waterway, the River Park Foundation is advocating for creation of a 52-mile, river-long system of parks and trails to celebrate the river’s unique natural and cultural heritage and to provide the community additional opportunities to get outdoors, enjoy nature and reconnect with this river that has been so central to our region’s growth and prosperity.

During its first decade, the River Park Foundation has accomplished much toward the goal of a clean and healthy river and a river park and trail system. Among these successes are the organization of tens of thousands of hours of volunteer service hours resulting in the removal of 1.3 million pounds of trash and debris from the river habitat, collection of over six years of water quality data, the creation of five community mural projects, creation of the San Diego River Garden in Mission Valley, preservation of several hundred acres of critical open space and much more.

Aside from engaging the community to help the river, the River Park Foundation has also played a major role in bringing together both governmental and non-governmental organizations by forming and chairing the San Diego River Coalition, now comprised of over 70 different groups. The Coalition meets monthly and focuses on advancing the River Park vision and giving the river a stronger voice at all levels.

The River Park Foundation was co- founded by 4th generation San Diegan Rob Hutsel, who is also the organization’s Executive Director. Hutsel has dedicated the last decade of his life to growing and leading the organization and continues to lead the “river family” with inspiration and dedication. Many original founders of the organization continue to play an important role for the river as board members or volunteers; and there are now six full-time employees and up to ten interns at any given time.

Over 760,000 people rely on water from the river. The River Park Foundation is the only organization dedicated to the San Diego River and watershed which encompasses 440 square miles, with over 500,000 residents. As part of the River Park vision, the River Park Foundation has conserved nearly 800-acres of pristine open space at the source of the river. These lands, which were privately held, are now being opened to the public for recreation and enjoyment while also preserving critical wildlife linkages.

There will be plenty to celebrate at the 10th birthday party, where those in attendance will reflect on the valuable contributions they have made… and will look forward to making even greater strides during the next decade. To learn more about the organization visit www.sandiegoriver.org.