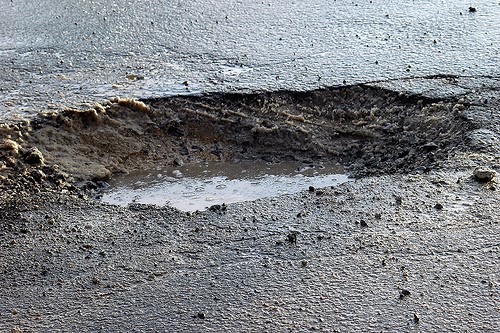 March 15, 2017 (San Diego) — County Supervisors voted 4-0 on Tuesday to direct staff to come back in 90 days with recommendations on new funding sources to pay for road repairs.

The latest Pavement Condition Index, or PCI, back in September gave the county a score of just 60, or “fair” – and that was before winter rains and flooding caused cracks and potholes to proliferate.  Supervisors’ set a goal to raise that score to 70, or “very good” within five years.

Chairwoman Dianne Jacob said it’s a “hard pill to swallow” to admit the County has a problem keeping streets safe.

The County has been getting less money from the state for road repairs and maintenance due to falling gas tax revenues statewide. Gas taxes have fallen from 39.5 cents a gallon on average three years ago to 27.8 cents today due to lower fuel prices. In addition, more people are driving fuel efficient vehicles, so they’re using less gas.

Supervisor Bill Horn also accused legislators of diverting some gas tax revenues for purposes other than funding fixing roads.  He wants the county to be a “squeaky wheel” asking the state for more money.

Jacob indicated she will send letters to Governor Jerry Brown and state legislators, also asking staff to reach out to the local Congressional members and the Trump administration.

The latter could prove challenging with the new budget proposed by Trump slashing funding for programs across the board. The President has indicated, however, that he wants to create an infrastructure program, leaving open the door for getting funds for local projects added into an infrastructure bill – if Congress votes to approve it.

Last year, the County had to spend a portion of its reverses on repaving roadways. But Jacob noted that deferring maintenance can create even costlier repairs later on.

Let me get this straight: I read two articles, one about how the county supervisors outlaw marijuana growing and sales, and in another they lament there is no money to fix potholes? Am I the ONLY person in the county to miss the connection between the two? The last election showed the people WANT marijuana growing and sales, AND they want potholes fixed, yet the board of supervisors kill marijuana and all the many millions in tax revenue; then wring their hands about funding said potholes fixes. Bells should be ringing loudly with the one answer to both issues right at hand! DOH!
and the only basis for her position that she's stated is federal law, which is no position at all and irresponsible.
So it will take five years to fix the roads? And we can't smoke a joint waiting for it? Even Muslims won't want to come here.